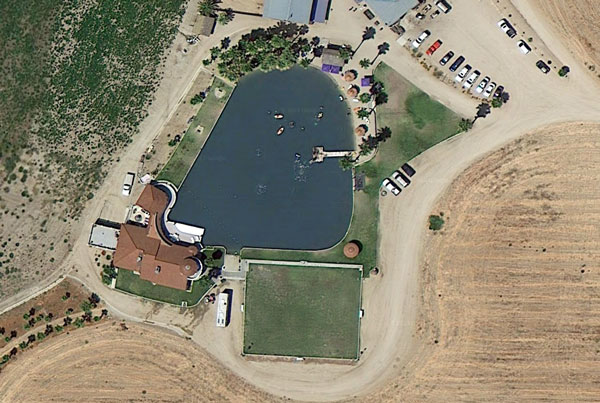 An image of Star Farms lake from Google Maps.

On Friday at 5:41 p.m., San Luis Obispo County Sheriff’s deputies responded to the report of an 11-year-old boy missing from a private party event at Star Farms at 7835 Estrella Road in rural San Miguel, northeast of Paso Robles.

The juvenile was last reported seen swimming in the Star Farms lagoon with other juveniles approximately 10 minutes earlier. Just moments later, the juvenile was located in the water and brought to shore. CPR was initiated and continued by sheriff’s deputies until the arrival of medical personnel who transported the juvenile to Twin Cities Hospital.

Twin Cities Hospital subsequently reported that the juvenile, Michael Derick Gallegos of Morro Bay, succumbed to the injuries/exposure related to this event and was pronounced deceased at 8:41 p.m., the sheriff’s office reports. Further investigation into the cause and manner of death will be conducted by coroner investigators. Next of kin have been notified.

Star Farms is a local attraction with a lake, dock, cabana and palm trees. It hosts beach parties, private events and recently a wine tasting. Its main feature is a half-acre lagoon oasis featuring views of the surrounding vineyards.