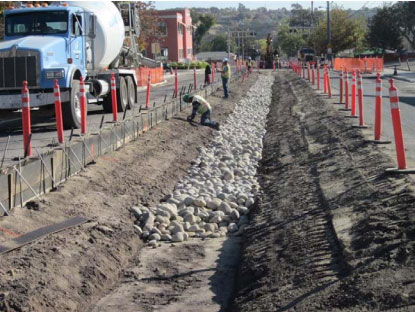 The renovation of 21st Street in Paso Robles is underway and set to be completed in the spring of 2014. The project will improve 21st Street and minimize stormwater impacts locally and downstream.

The city recently trenched the middle of the road and installed cobble stones. This area will carry run‐off water during a storm in lieu of pipes. The side slopes of the median will be planted with landscaping.

Much of the landscape along 21st Street will be specially designed to slow, clean, and infiltrate stormwater. These landscapes, called bioretention areas, may look like standard planters, but the surface grades (concave to fill like a bathtub), soil mix, and specialized plants make them high-performance landscapes. They are green infrastructure systems that mimic nature to provide flood control, improved water quality, and groundwater recharge within the structure of an urban street.

Design features of the project

The 21st Street Improvement Project is grant-funded via a state, voter-approved, Urban Greening Grant. The project was approved by the city council in March 2013 and construction began in April. 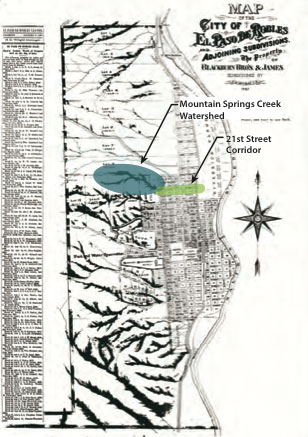 Paso Robles’ natural spring waters have long attracted visitors and new residents to the area. In 1886 the Southern Pacific Railroad arrived, making Paso a destination location. This historic subdivision map from 1887 shows the downtown center surrounded by a grid of new neighborhoods and a list of buyers, many from the Bay Area. The subdivision did not set aside space for natural features such as creeks and flood plains. 21st Street was located along the historic path of Mountain Springs Creek. As the area developed over time, the creek was buried in underground pipes piece by piece between the early 1940s and mid 1980s. 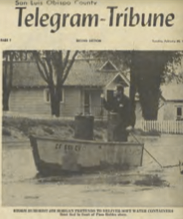 As the landscape has changed from oak woodland to the streets and rooftops of a neighborhood and business district, less rainfall can collect in plants and seep into the ground. During big storms, rainfall overfills the pipes and floods the street, as shown in this 1969 photo of the Culligan Man pretend- ing to deliver water softeners by boat on 21st Street. Clean water from the upper watershed mixes with the dirty water coming off the streets, and it all flows down to the Salinas River. All of these paved surfaces and pipes mean that less rainfall can soak into the ground to feed Paso’s aquifers.

The new design treats rainwater as a precious resource. During storms, water from Mountain Springs Creek flows through a landscaped channel down the center of the street. Rain that falls on streets, where it picks up pollutants, flows into specially designed planters on the road edge, to be cleaned by plants and soil as it filters into the ground. At the bottom of 21st Street, these waters merge together before flowing down to the Salinas River.