4 dead, ‘unknown suspects’ at large after 10 people shot in Fresno 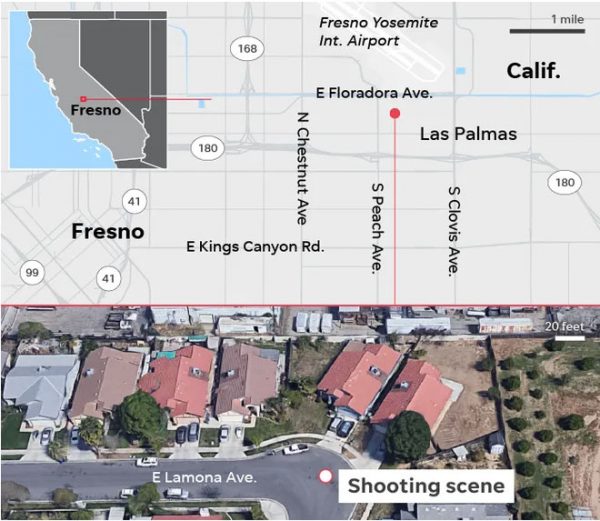 The suspects of a shooting in Fresno remain at large. Four people were killed and six people were injured after “unknown suspects” snuck into a “friend and family gathering” on Sunday in Fresno, California, police said. Their identities remain unknown.

Three victims were found dead at the scene, while the fourth died at a local hospital. Five people are currently in critical condition but are expected to survive, while a sixth was released with a minor bullet wound.

“This was a gathering, a family and friend gathering in the backyard, ” Fresno Police Lt. Bill Dooley said. “Everyone was watching football this evening when unknown suspects approached the residence, snuck into the backyard and opened fire.”

Fresno Police reported that “unknown suspects” snuck into a backyard party while a group of people were watching the Los Angeles Rams-Chicago Bears Sunday Night Football game at a home in Fresno’s southeast side, about a half-mile from the Fresno Airport.

About 35 people were in attendance when the shooting began. Shooters opened fire on the 10 people in the yard, while the remaining attendees inside the house were unharmed.

The shooting took place at 6 p.m. local time. Little is known about the suspects in the shooting. Police have yet to release a description of the shooters. It is unclear if more than one shooter was involved.

Police said the victims likely did not know the suspects. No one has been arrested in connection with the shooting.

The shooting did not appear to be gang-related, Fresno police said, but the possibility was not ruled out. The motivation for the attack remains unclear.

All of the victims were Asian men ranging from the ages of 25 to 35, said Fresno Police Deputy Chief Michael Reid.

They were taken to Community Regional Medical Center in Fresno.