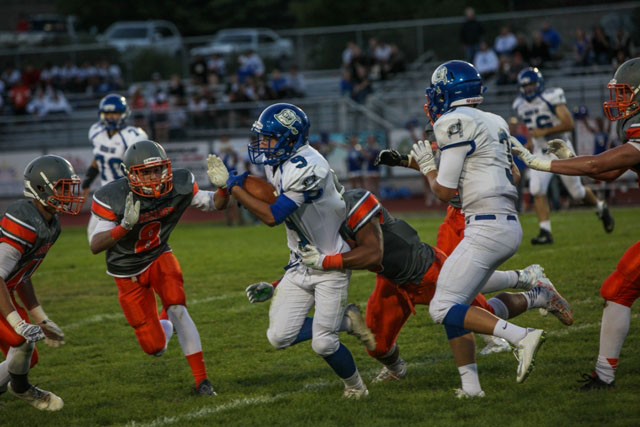 The Greyhounds put the pressure on the Pirates in their season opener. Atascadero dominated Morro Bay, 62-14. Photo by Rick Evans.

– The Atascadero Greyhounds grabbed the lead from the start and held on to dominate the visiting Morro Bay Pirates, 62-14, in their season-opener Friday night, with Coach Vic Cooper playing all three of his quarterbacks throughout the game. 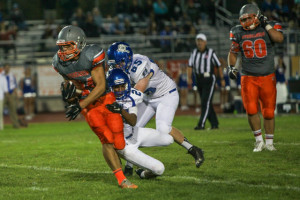 Atascadero senior running back RJ Reusche brings the ball towards the end zone in the Hounds’ victory over the Pirates. Photo by Rick Evans.

An early fumble in the game by Morro Bay allowed Atascadero’s Marc Martin to score a touchdown and, with the kick from Logan Armstrong good, the scoreboard read 7-0 and the Hounds were released from that point on. With many unsuccessful offensive drives by Morro Bay, Atascadero kept finding their way into the end zone and Martin would go on to score for a second time in the first quarter.

By the middle of the second quarter, the Greyhounds led the Pirates, 41-0, with touchdowns scored by R.J. Reusche, Sean Moller, and Tannen Soojian and extra points from Armstrong. Finally, the Morro Bay defense did what their offense could not. After Noah Clapp scooped up a fumble and ran the ball in for a touchdown and Brandon McGinley added a 2-point conversion, the scoreboard read 41-8.

Atascadero continued the scoring patterns in the third quarter, took advantage of more fumbles by the Pirates, and scored touchdowns courtesy of Colby Olive and Elijah Cooks. With extra points added from Armstrong, the Hounds jumped ahead, 55-8.

Moving into the fourth quarter, on yet another fumble by the Pirates, the Hounds’ Nigel Warren scored, the extra point was good, and they padded their lead to 62-8. With little time remaining in the fourth quarter, Morro Bay’s Josh Skiffington managed to find the end zone but, with the kick being wide, the final score was 62-14.

Overall, it was a disappointing night for the Pirates with their starting quarterback, Isaac Manuputy, who is also the team’s kicker, on the sidelines the entire game with a foot injury.

The Atascadero Greyhounds (1-0) are set to travel to Bakersfield on Friday to face the Stockdale Mustangs (1-0) at 7:30 p.m.