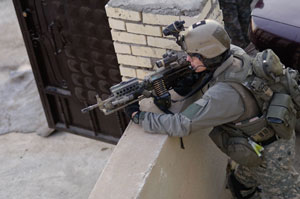 Rangers are being tested on their combat skills in a simulated urban environment similar to those they may find during combat missions. This is a routine military exercise conducted periodically to maintain a high level of combat readiness for the Rangers.

To make the exercise as realistic as possible, training is conducted during hours of darkness, during which neighbors may hear increased air traffic. Rangers will use simulated munitions and small pyrotechnics, which may cause loud noises.

As with all training, safety is the first priority. Rangers receive up-to-date safety briefings and safety standards must be observed at all times during training.

The units are extremely sensitive to the impact exercises may have on local citizens, and the goal is to train safely and courteously. Every measure will be taken to reduce the amount of noise associated with this training.

The 75th Ranger Regiment is a lethal, agile and versatile special operations force that conducts forcible entry operations and special operations raids across the entire spectrum of combat. Tough, realistic military exercises conducted regularly give the Rangers a decisive edge for real-world missions. Exercises such as this are the best method to test their readiness capabilities.