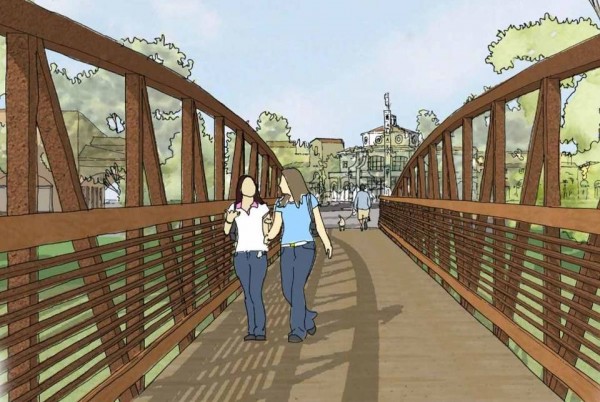 –Construction on a bridge connecting pedestrian traffic between Atascadero’s Sunken Gardens and the Colony Square shopping center is scheduled to start in 2017. The Atascadero City Council approved the nearly $3 million project during last week’s council meeting. The Downtown Pedestrian Bridge project will include the Centennial Plaza connecting East Mall to a trail to the bridge spanning Atascadero Creek and a trail that runs between El Camino Real and Lewis Avenue. Included in the plans are improved and additional parking, disability-accessible parking for city hall and the Atascadero Historical Society Colony House and creek restoration with interpretive signage.

The proposed Centennial Plaza connecting East Mall to the creek side path and Downtown Pedestrian Bridge.

According to the staff report to the city council, the project has been waiting since it was first presented in the 2005 Downtown Revitalization Plan. Originally slated as a project of the city’s Redevelopment Agency the plans moved forward in 2011 when the city acquired the 2500 square foot lot along East Mall for the Centennial Plaza. Environmental studies were completed, permits were obtained and the project design was brought to 60-percent completion. The project was shelved when state legislation dissolved all redevelopment agencies in 2012. The project was given new life when surplus funds from the 2010 City Lease Revenue Bonds came available. The proceeds from the bonds exceeded the amount needed to complete the City Hall Rehabilitation Project and the remaining $3,025,070 have been allotted to the bridge and plaza project. 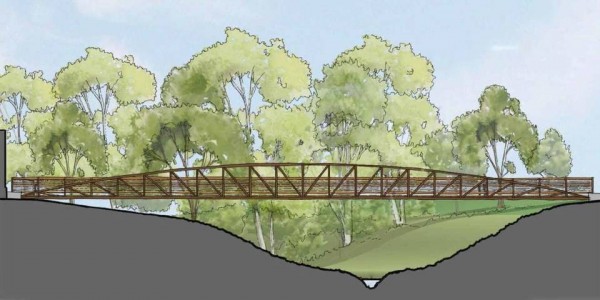 The staff report concluded that project, “will help to create the sense of place that our downtown is currently missing, thereby potentially stimulating new restaurant and retail development, while implementing the Downtown Revitalization Plan.” A slide show presentation about the city’s development plans can be found on the web page for the Office of Economic Development.

Bobbi Nunez, owner of the ARTery on Traffic Way has been involved with the bridge project since its earliest inception. “I think it’s a great idea but I’m not comfortable that things like lighting and the homeless encampments are not being addressed,” said Nunez. “Good lighting and police presence to curtail the drug dealing really needs to be addressed in this plan.” Nunez says she supports the project but feels it would be better down the line when there is sufficient development to warrant the project.