Paso Robles News|Friday, August 7, 2020
You are here: Home » Top Stories » Be on the lookout for the Asian citrus psyllid

Be on the lookout for the Asian citrus psyllid 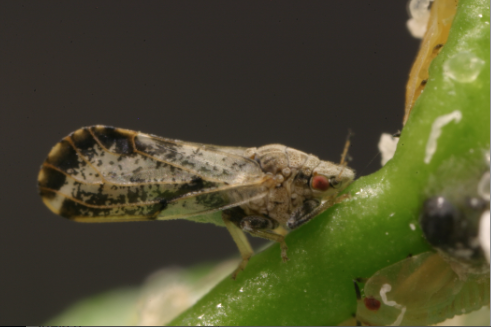 The public is asked to look for signs of the Asian citrus psyllid in Paso Robles. 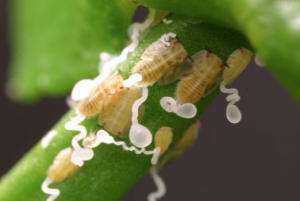 The insects as nymphs.

A dangerous citrus pest was recently found in Santa Maria and agricultural officials are warning Paso Robles residents to be on the lookout. The pest is  called the Asian citrus psyllid, and it can be a carrier of Huanglongbing (HLB), also known as citrus greening disease.

So far, HLB has not been detected in San Luis Obispo County, but if it takes hold, it will be deadly for citrus trees in the region, experts say.

Once trees are infected with HLB, they will eventually die, threatening not only the ability of homeowners to grow citrus in their backyards, but the San Luis Obispo citrus economy. One of the best ways to prevent HLB from taking hold, is to stop the Asian citrus psyllid, which can transmit the disease from tree to tree as it feeds. 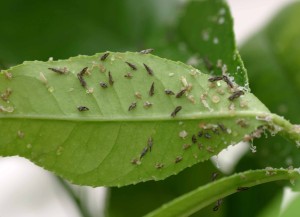 Paso Robles residents are asked to do their part. The Citrus Pest & Disease Prevention Program and the San Luis Obispo agricultural commissioner offer the following tips:

• Cooperate — Cooperate with agriculture officials on detection and suppression efforts of the Asian citrus psyllid and HLB.
• Don’t move citrus — Do not bring any citrus plant material into the county from other areas because they might be carrying psyllids or be infected with HLB.
• Inspect your trees — Look for signs of the pest and disease each month or whenever watering, spraying, pruning or tending trees.
• Learn what to look for — Visit CaliforniaCitrusThreat.org or use the Save Our Citrus app, which can be downloaded from the website.
• Plant responsibly — Only buy citrus trees from reputable, licensed California nurseries.
• Be mindful of clippings — Dry or double bag plant clippings prior to disposal to avoid moving psyllids and HLB-infected plant materials.

About the Asian citrus psyllid

The Asian citrus psyllid, Diaphorina citri, is a sap-sucking, hemipteran bug in the family, Psyllidae. It originated in Asia but it is now also found in parts of the Middle East, South and Central America, Mexico and the Caribbean. In the United States, this psyllid was first detected in Florida in 1998 and is now also found in Louisiana, Georgia and South Carolina. In Southern California, where it first appeared in backyard citrus in 2008, an eradication program has been instituted in an attempt to prevent it becoming established. In the whole of the United States and its territories, areas where this psyllid are found are under quarantine restrictions. 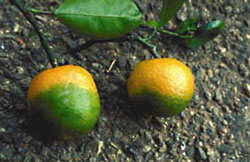 Huanglongbing is probably the worst disease of citrus caused by a vectored pathogen. The causative agents are motile bacteria, Candidatus Liberibacter. The disease was first described in 1929 and first reported in China in 1943. Likubin has seriously affected Taiwan since 1951. The African variation was first reported in 1947 in South Africa, where it is still widespread.

If you think you’ve found the psyllid or the disease, contact your local agricultural commissioner’s office or call the California Department of Food and Agriculture hotline at 800-491-1899.