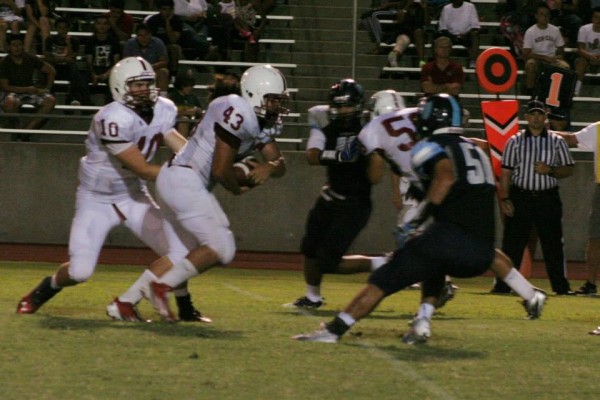 Paso High quarterback Gunnar Griffin hands the ball off to running back Tristan Sexton as the Bearcats take on the Bullard Knights on Saturday. Photo by Jennifer Railsback.

FRESNO – In perhaps the toughest battle they will face all season, the players on the Paso Robles High School varsity football team were unable to hold off the force of the Bullard offense Saturday night as the Bearcats fell 56-30 to the Knights in their 2013 season opener.

After graduating a large number of starters from last year’s team, the Bearcats are in a bit of a rebuilding year whereas Bullard returned over half of their starters to the field this season. Still, that was not an obstacle for the Paso players as they faced Bullard with a winning mentality.

With quarterback Gunnar Griffin and wide receiver Bailey Gaither leading the team, the Bearcats managed to keep up with the Knights until the end of the third quarter. Although Bullard scored first, the Bearcats let loose their power as they traded touchdowns in a back and forth manner with the Knights for the majority of the game.

With seven minutes remaining in the third quarter, the scoreboard read 28-24 in favor of Bullard. Bullard’s big plays continued to dominate the field, however, and whether it was the Fresno heat, the speed of the Knights or just being outmanned, the Bearcats were unable to keep up their momentum and boarded the bus back home with a 56-30 loss.

After a bye this week, the Bearcats will host the Santa Ynez Pirates on Friday, Sept. 13 at War Memorial Stadium behind Flamson Middle School. Junior varsity takes the field at 4 p.m. followed by the varsity at 7 p.m.

For more photos from the Paso vs. Bullard game, visit https://www.facebook.com/2013PrhsVarsityBearcatFootball