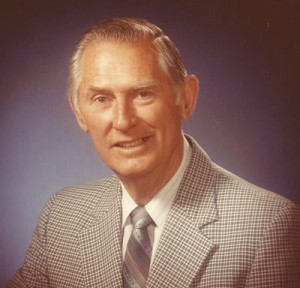 Benjamin L. Brown was born in Hermosa Beach, CA, on November 4, 1923, the only child to parents June Lillian Kelly and Benjamin Lockard Brown. He graduated from Jordon High School in Long Beach, CA and for the next few years worked in the field of electrical systems and devices, an interest that stayed with him all his life. His lack of formal schooling did not stop him from advancing in his career, as he had a lifelong passion for learning through self-study.

On December 29, 2013, he died peacefully of pneumonia at the age of 90, surrounded by his family.

A job at Shell Oil Company in his early 20’s was significant because that is where he met Mary Kurth, and the attraction between them was immediate and mutual. After a courtship of 3 months they were married, and remained happily so for 61 years. They had two children, Nancy and Tim, and their early years were spent in Hollydale, CA where Ben went to work for North American Aviation as a Flight Line electrician working on B-45 bombers. He stayed with North American (which later merged with Rockwell International) for 27 years, until retirement. Ben worked his way up to manager in the quality control department, supervising 200 employees. Among the projects Ben worked on were inertial navigation systems for the Minuteman Missile and Polaris-Poseidon submarines.
Ben had many hobbies over the years including ham radio, real estate investment, computer systems, reading, travel, photography, painting, and flying his own airplane. In his late 50’s he earned a Bachelor’s Degree from the University of Redlands.

After their children were grown Mary and Ben were able to fulfill a lifelong dream of owning a mini-farm outside Riverside, CA. They raised ducks, chickens, geese, sheep, cows and dairy goats, had an orchard and huge vegetable garden and were close to being self-sufficient in providing their own food.

The last home that Ben and Mary purchased was in Paso Robles, CA in 1987. There they became involved in community activities, volunteering with the local Historical Society and serving in their church, Live Oak Christian. After Mary’s death at the age of 83, Ben continued to live there on his own, until it became necessary to move into an assisted living facility.