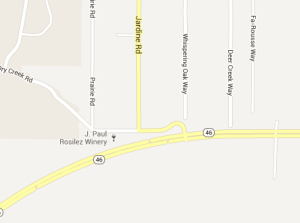 The 55-year-old bicyclist injured in this collision on July 3, 2013, has been identified as Paso Robles resident Richard Cortez, Jr. He has been admitted to the intensive care unit at a local hospital and his condition is listed as critical but stable.

On Wednesday, July 3, 2013 at approx. 6:35AM, the Paso Robles Police Department and Department of Emergency Services responded to an injury traffic collision west of Jardine Road on Highway 46 East.

Officers determined a vehicle struck a 55-year-old male bicyclist after he entered the eastbound traffic lanes. The bicyclist was treated at the scene and transported via ambulance to a local hospital for major injuries. This subject has since been admitted to the hospital in critical condition. His identification is being withheld pending notification of next of kin.

The driver of the vehicle was not injured in this collision and remained at the scene to cooperate with investigators. While the cause of the collision is still under investigation, it does not appear that drugs or alcohol were involved.

This investigation is continuing and anyone with information regarding the collision is encouraged to call the Paso Robles Police Department.