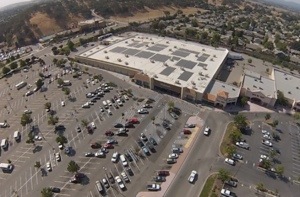 Aerial view of the Walmart in Paso Robles.

Suspicious package was a false alarm

The Paso Robles Police closed River Road today after a report of a suspicious package near Walmart. The road closure was between Niblick and Serenade.

The San Luis Obispo County Bomb Task Force arrived and deployed a robot at about 1:15 p.m. The package was opened which contained miscellaneous trash items that did not pose a threat to the public. All cordoned off areas, closed streets and evacuated areas were reopened at approximately 2:00 PM.

Police had issued an alert at 12:28 p.m. to local residents asking everyone to avoid the area. Parts of Walmart and the parking lot were evacuated.

The incident began at about 11 a.m. when police received a call from a citizen regarding a suspicious package. The citizen reported seeing a brown paper bag sealed with black tape in an unattended shopping cart. The shopping cart was located outside Walmart on the east side of the store next to the garden center and some propane tanks.

The Paso Robles Department of Emergency Services and the police department set up a command post in the area and began cordoning areas of the parking lot, closing portions of South River Road and evacuating parts of the Walmart store for safety measures.