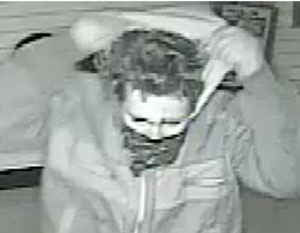 Still image of one of two suspects at Rental Depot.

On Thursday at approximately 7:15 a.m. the Paso Robles Police Department received a report of a burglary that had occurred at the Verizon Wireless store in the 2300 block of Theatre Drive.

The investigation revealed that two suspects forcibly entered the closed business by smashing out the glass front door with a rock. Once inside, the suspects stole assorted electronic devices valued in excess of $20,000.

The crime was captured on the business surveillance video, which showed that it occurred at approximately 3:22 a.m. The suspects appeared to have both been adult males. Both were wearing bulky clothing and gloves, and both had their heads covered.

On Friday at approximately 4:21 a.m., Paso Robles police officers heard a commercial
burglar alarm sounding in the area of 10th and Riverside. Officers responded and found the front glass door to the Rental Depot, 1000 block of Riverside, smashed in.

The investigation revealed that this crime was also captured on the business surveillance video system. On the video, two suspects can be seen forcibly entering the business by smashing the glass door.

Once inside, the suspects stole two portable generators and other items valued at approximately $9,000 and fled. The suspects appeared to both be white adult males. Both were wearing bulky clothing and had their heads and faces concealed.

Members of the community are encouraged to view this surveillance video and see if they recognize these suspects to assist the police with this investigation.

Can you identify these suspects and help police solve these crimes?