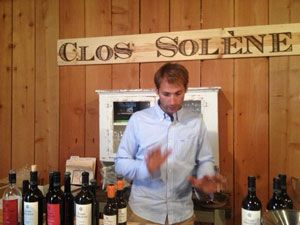 Pronounced gare-ah-jeest, the term “Garagiste” was originally used in the Bordeaux region of France to denigrate renegade small-lot wine makers, many of whom made wine out of their garage. The term has since evolved to include a group of boutique winery producers who strive to produce impeccable artisanal wines with an emphasis on innovative growing and winemaking techniques.

“When it comes to the production of age-worthy Cabernet Sauvignon and Bordeaux varietals, it’s important to showcase all of the talent within Paso Robles,” said board member Cynthia Lohr, owner and VP Marketing, J. Lohr Vineyards & Wines. “The garagiste wineries bring a spirit of innovation, entrepreneurship and excitement to the mix. When you look at the Paso Robles community, we really have such a broad basis in our membership, from established wineries to boutique efforts. What the garagiste producers in Paso Robles are doing is representative of a track within the wine industry — as well as with the consumer — to be hands-on and to elevate the best of the land and the fruit.”

The CABs of Distinction Grand Tasting Gala will be held at River Oaks Hot Springs in Paso Robles and will include tastings of 32 wineries each paired with artisanal cheese or charcuterie. Admission includes a decadent catered luncheon provided by notable Paso Robles restaurants and caterers, including Robert’s Restaurant, Crush Catering and Avant-Garde Experience, chocolate tastings, live music, a barrel-making demonstration and more.

About the Garagiste Wineries

Clos Solene Winery proprietor and winemaker Guillaume Fabre hails from Bordeaux, France, but he now spends his days handcrafting robust, age-worthy Cabernet Sauvignon at his Paso Robles vineyard, which offers up a comparable terroir. Although Clos Solene produces just 700 cases per year, the award-winning winery has caught the attention of Wine Spectator and The San Francisco Chronicle among other notable press.

L’Aventure Winery is owned and operated by winemaker Stephan Asseo, a fellow French transplant who sought incredible terroir as well as the freedom to break with staunch winemaking tradition. After working for years in Bordeaux and Burgundy, he took the leap to Paso Robles, where winemaking “rules” are meant to be broken.

Known for his inventive blends, Asseo only produces varietal Cabernet Sauvignon wine when the grapes are at optimal quality. The winery will pour its sought-after Cabernet Sauvignon Cuvée at the upcoming CABs of Distinction Gala.

“Although we only produce Cabernet every other year, my father loves to showcase the varietal,” said L’Aventure Sales, Marketing and Communications Director, Chloe Asseo. “We’re so happy the PRCC is out there showing people that there is great Cab not only in Napa, but in Paso Robles. Most small producers of Cabernet Sauvignon lack the opportunity to showcase what they do, and that’s why it’s so important to promote the varietal.”

Helen and John Falcone of Falcone Family Vineyards worked for decades within the Napa Valley wine industry before setting down roots in Paso Robles soil. John, a former winemaker for Atlas Peak Vineyards and Helen, former assistant winemaker at Chimney Rock Winery, are known for producing limited amounts of high-quality Cabernet Sauvignon through their Falcone Family Vineyards label, which has garnered praise from Wine Enthusiast, among others.

“Our wines have received very good reviews wherever we take them,” said Helen Falcone. “Like many Garagiste producers, we don’t have a tasting room and our production is quite small, so it’s very important to participate in events offered by the PRCC. Being part of the CABs of Distinction Gala event brings us face-to-face with consumers, which is incredibly effective.”

Jim Madsen underscored the fact that many Garagiste wines can only be found on reserve wine lists at high-end local restaurants. Like many of his fellow renegade winemakers, Madsen thinks of the small production wines as “jewels.”

“Garagiste producers create highly sought-out wines,” said Jim Madsen. “We hope The Farm Winery can bring a small push towards contributing to the reputation of Paso Robles as being a special place for Cabernet Sauvignon.”