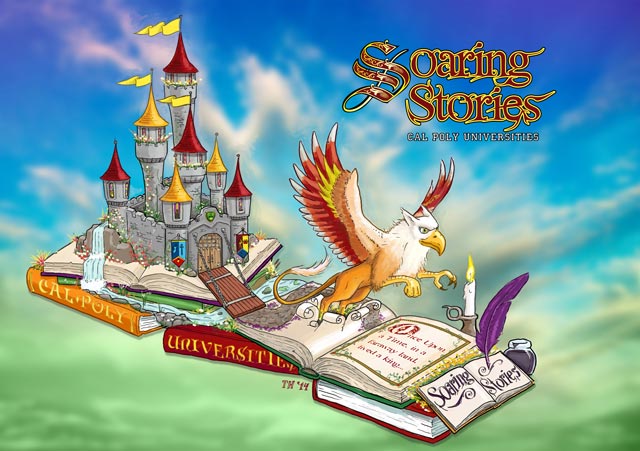 The Cal Poly Rose Float organization announced the 2015 Cal Poly Universities Rose Float, “Soaring Stories”, as the only student-made float that will cruise down Colorado Blvd.in Pasadena on New Year’s Day. Both Pomona and SLO leadership teams chose “Soaring Stories” from over 100 submitted entries. A Rose Float Alumni submitted the winning concept for this year’s float. After the concept was chosen, the students enlisted the help of a professional graphic artist to draw the formal rendering with direction from the design team.

“Soaring Stories” celebrates the 126th Tournament of Roses Parade theme “Inspiring Stories” as books come to life with a fantasy world. An ornate castle is popping out of the page as a beautiful waterfall cascades back into the book. A majestic griffin is about to take flight as he bursts out of the open page, creating the wonder and magical sense of how stories can come to life and inspire us every day.

The Cal Poly Rose Float is the only student-built float that has been invited to the parade for 67 consecutive years. The schools’ “Learn By Doing” motto is exemplified in all facets of the program, as students get hands-on experience turning their concepts into creations. All of the welding, metal shaping, machining, foam carving, woodworking, painting, and flower harvesting is done by students of all majors and backgrounds. This is a unique experience for volunteers to get involved with, as students compete with professional float builders to win prestigious awards and have their work showcased internationally on television.

Since 1949, students from Cal Poly San Luis Obispo and Cal Poly Pomona have come together across 240 miles to produce the only student-built floral float for the Tournament of Roses Parade in Pasadena, CA on New Year’s Day. This year, Cal Poly San Luis Obispo will be moving the back half of the float to Pomona on Saturday, October 18, 2014, to officially unite both the float and the teams. Until the day of the parade, the team will be working nonstop to create a float that inspires, impresses, and ultimately wows Rose Float members, alumni, the judges, and millions of viewers around the world with the Cal Poly Universities Rose Float “Soaring Stories.”

Construction will continue on the San Luis Obispo campus until October 18. The San Luis Obispo half of the float will then move to the Cal Poly Pomona campus where all of the students work together for the rest of the year. Animation on this year’s float includes the griffin flapping its wings, a working drawbridge, and a flowing waterfall. Students have been growing and harvesting plants from the on-campus Rose Float flower fields all summer. These flowers, including yellow and purple statice, bougainvillea, orange and yellow marigolds, and red strawflower, will be used on this year’s float as colorful decorations.

On Tuesday, October 7th, the Rose Float team will be hosting its Informational Meeting upstairs in the University Union, Room 220 at 7:30pm. Everyone is welcome to learn about how a Rose Float is made and the volunteer and skill-building opportunities among the construction, design, and decoration teams. Attendees are welcome to interact with the committee and ask any questions they may have. Free ice cream will also be provided.