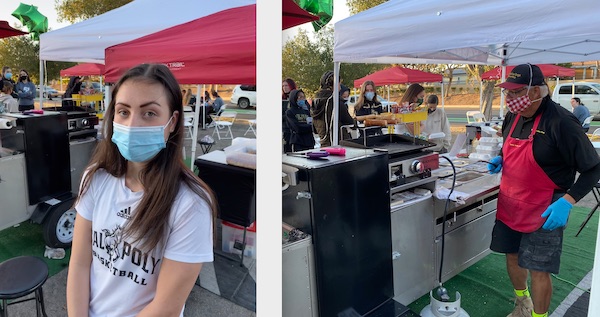 The Mustangs are coming off an exciting win at Long Beach State last Saturday. With the score tied and only one second left on the clock, “Downtown” Abbey Ellis hit a long three-point shot to win the game 45-42. It’s the third time this season the 5’8” Australian has won a game in the closing seconds of play.

The Mustangs are now 11-7 for the season, 7-5 in conference. They play two games this weekend at UC Davis. They host UC Santa Barbara for two final regular-season games in early March. Then, they’ll play the Big West Conference Tournament at the Mandalay Bay Events Center in Las Vegas.

After enjoying a Yabba Dabba Dog Thursday afternoon, the women climbed back onto the team bus and headed north to Davis for back-to-back games Friday and Saturday against the UC Aggies.