California condors may be expecting 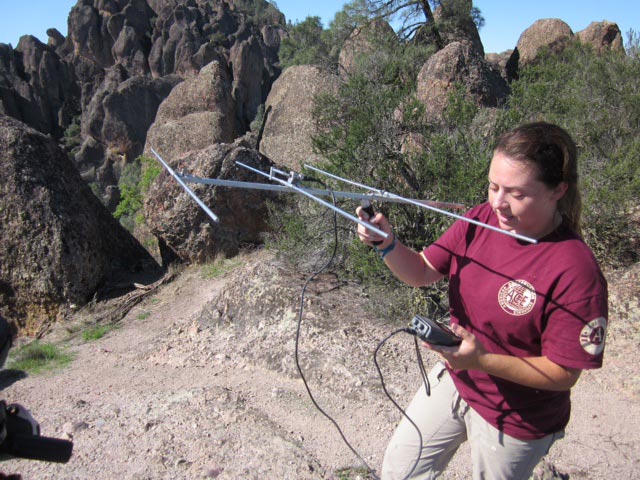 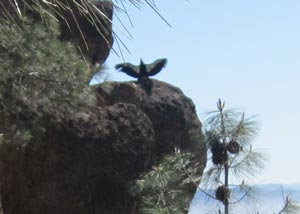 Condors nest in the rocks at The Pinnacles.

A pair of California condors at the Pinnacles National Park east of King City may be expecting. Wildlife biologist Rose Fielding is monitoring the behavior of the condors from nearby peaks and last week said it looks like the condor pair is nesting.

To study their behavior, Fielding uses a listening device and a telescope. Originally from Baltimore, Fielding graduated in Wildlife Biology at Colorado State University. She serves in Americorps at the Pinnacles.

The California condor is an endangered animal and the largest flying bird in North America. Their wing span may stretch more than nine feet. When in flight, these huge birds glide on air currents and can soar as high as 15,000 feet. Like all vultures, condors are scavengers that feed on carcasses of large animals.

After decades of declining populations, condors neared extinction in the late 1970s, when only two or three dozen birds where known living, according to National Geographic magazine. In 1987, when the wild population dropped below 10 birds, all of the remaining wild condors were brought into captivity for a breeding program. Today, about 200 of the birds live in the wild thanks to breeding programs.

On Tuesday, four more California condors were released into the wild at Big Sur by the Ventana Wildlife Society. A live cam of their release is featured here: http://www.oaklandzoo.org/Condor_Cam.php

The Pinnacles National Park is just east of King City and Soledad. Admission to the park is $5. During the summer, the temperature often soar over 100 degrees. If you visit, you’re advised to take plenty of drinking water and wear appropriate clothing for hiking.