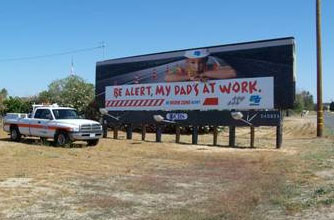 A new Caltrans Highway Safety campaign, as part of the ‘Slow for the Cone Zone’ campaign, featuring the children of Caltrans’ very own field maintenance employees and highlighting a message to “Be Alert, My Mom/Dad’s at Work” is underway, Caltrans officials announced.

“I am very excited for these new billboards because they convey a very clear message that we all have families and want to return home safely to them at the end of our work day,” says District 5 Director Tim Gubbins.

A casting call to Caltrans’ field maintenance employees was issued statewide last month. All of the kids who attended the photo shoot were used for the billboard campaign, children of five different Caltrans field maintenance families.

Since 1924, 183 Caltrans employees have been killed on the job, including eight in District 5. One of the biggest hazards for workers is motorists who do not exercise caution while driving through highway work zones. Caltrans reminds everyone to ‘Slow for the Cone Zone’.