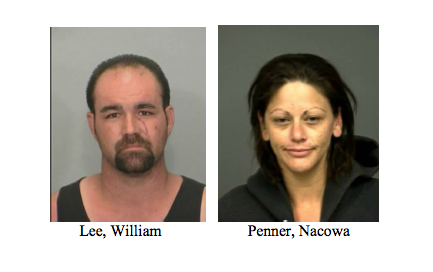 On Tuesday, May 21, 2013 at approximately 9:15PM Paso Robles police officers were dispatched to the area of the 3200 block of Spring Street after receiving a report of a stolen vehicle.

The adult male victim reported he was completing some errands and when he returned to his vehicle, he was confronted by two armed suspects who demanded he turn over the keys to the vehicle. The victim complied with the demands and one of the suspects drove off in his vehicle while the other suspect got into another vehicle waiting nearby and fled the area.

Officers searched the area and located the victim’s vehicle abandoned a short distance away. The stereo had been removed along with some of the victim’s personal property.
Based on descriptions of the suspects and vehicle provided by the victim, the other vehicle associated with the suspects was located by SLO County Probation Officers who were in the area. This vehicle was located at a service station on Spring Street at 24th Street. The vehicle was occupied by two adult males and two adult females.

The knife used in this robbery, along with other evidence linking this suspect to the crime was located in the vehicle. Also, several items of the victim’s personal property were recovered and turned over to the victim. The gun used by the suspects was not recovered. The victim was not injured during this event.