Paso Robles News|Monday, June 14, 2021
You are here: Home » Community » Celebration of life to be held for Jay Barber

Celebration of life to be held for Jay Barber 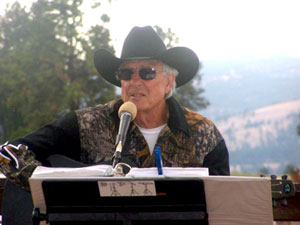 There will be a celebration of life for former Paso Robles resident John W. “Jay” Barber at 2 p.m. Saturday, March 8, at the Paso Robles Elks Lodge, 1420 Park St. in Paso Robles. Former band members will play music, and attendees are encouraged to bring instruments or join the singing.

Barber passed on Sunday, Dec. 8, 2013, in Missoula, Mont. He was born in April 1933 in a cabin in rural Missouri, the oldest of four. In his teens, Jay’s family uprooted and moved to Denver to treat his father’s TB. Jay worked to support his family, and learned early the value of hard work. At 20, he enlisted in the U.S. Air Force, where he served for 10 years. That same year he married Janice Moorhead. They had five daughters and were married for 37 years.

After the military, Jay joined State Farm Insurance, earned his degree, and dedicated nearly 40 years to this career, having earned several promotions. He became an active Paso Robles Rotary member. Jay loved to read and had a talent for telling jokes and stories with a contagious laugh. He was a self-taught musician and prolific songwriter, with 100s of pages of song-sheets left behind.

In retirement, music became his main passion. He met soul-mate Ruthie Danna, and they traveled in his motorhome to music festivals across the West. His Final years were spent with Ruthie at their Montana home gardening, canning or fishing. He could be found in his overalls and John Deere hat, or in his cowboy outfits, boots and Stetsons when performing.

Freedom and self-reliance were unwavering passions, and Jay was strong in will and resolve, fighting his illness longer than expected. His inner strength never waned, until he passed. Although Jay is no longer with us in body, his songs, spirit and laughter will be with us to enjoy always.