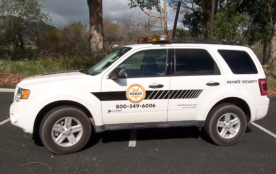 “We have always had a few clients here and there in Paso Robles and Atascadero, but we are certainly looking forward to being much more involved in the North County community”, says Sales and Marketing Director, John Page.

Bomar Security recently added a second mobile patrol unit to serve clients above the grade and according to Page, there is more to come. “I believe there is a huge opportunity for growth here. We have received enough feedback from our existing clients and prospects to warrant taking a closer look at a more targeted approach to our expansion.”

Although there aren’t immediate plans to open an office in Paso Robles, there are district managers based out of the San Luis Obispo office that serve as company liaisons to the North County.

When asked about the cause of the company’s recent growth and expansion Mike Garippee, District Manager, attributed it to a new partnership and a renewed corporate vision. “We have done a lot of work internally that has had an effect on our overall success we’ve have been fortunate to align ourselves with some of the innovators in the industry.”