Chamber of Commerce names 2014 Roblans of the Year

The Paso Robles Chamber of Commerce announced this week its selection for the 2014 Roblans of the Year. The chamber picked John and Marjorie Hamon. The Roblans of the Year award is presented annually to individuals in the community who have made a significant contribution to Paso Robles through community service, action, donations, and other on-going community outreach over the years. 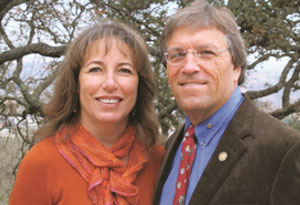 The Hamon family has a rich history on the Central Coast beginning with John’s Portuguese great-grandfather who immigrated to San Luis Obispo in the 1890’s. John Hamon was born on July 27, 1954 and raised in Lompoc, California. John was active in Boy Scouts, becoming an Eagle Scout, the highest honor in the Boy Scouts. He graduated from Lompoc High School and attended Cal Poly University in San Luis Obispo.

He met his future wife, Marjorie Triol, there. They married in 1975. John graduated from Cal Poly’s School of Industrial Technology with a Bachelors of Arts Degree. After graduation the Hamons made their home in Paso Robles where John earned his general contractors license. John joined his in­laws Tom and Bettie Triol in their family garage door business, Hamon Overhead Garage Doors.

John embraced the Paso Robles community and became an active volunteer in many organizations. He donated his time to the Boy Scouts of America, Paso Robles Troop 60. He was a Paso Robles Volunteer Fireman for 18 years, where he attained the rank of Captain. John served as President for the Rotary Club of Paso Robles and served as a Board Member for the Paso Robles Chamber of Commerce.

He sits on the Industrial Technology Advisory Board at Cal Poly, the Airport Advisory Committee and is currently serving his 3rd term as a Paso Robles City Councilman. John is Chairman of the City Planning Commission. John has been named Paso Chamber Roblan of the month twice.

Marjorie Hamon was born October 27, 1955 to Tom and Betty Triol. She has been a Paso Robles resident for 50 years, graduating from Paso Robles High School in 1973. Marjorie attended Cal Poly San Luis Obispo, where she met John, graduating with a Bachelor of Science in Industrial Engineering in 1978. After graduation she became a business owner and Vice President/Chief Financial Officer for her family’s business, Hamon Overhead Door Company.