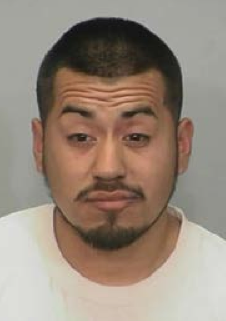 Paso Robles Police Department officers arrested Mario Sanchez Jr. for burglary and possession of cocaine On May 26, 2013, at about 3 a.m.

Officers were dispatched to the 1000 block of 19th Street after a citizen informed police dispatchers he was detaining a suspected car burglar. Officers arrived to the area and observed the citizen sitting on top of a 21-year-old, Templeton resident, Mario Sanchez Jr and detaining him.

The citizen told officers he was inside his nearby residence when he heard a car alarm sounding. The citizen walked outside and observed Sanchez running from a 1998 Dodge Caravan with a broken window. The citizen watched as Sanchez hid in the shadows until the car alarm turned off. Sanchez returned after a few moments and entered the car.

The citizen then observed the car’s owners exit their residence to check on their vehicle. The citizen warned the car owners someone was inside their van and ran to confront Sanchez. The citizen ultimately detained Sanchez until police officers arrived.

Pursuant to his arrest, officers searched Sanchez and located approximately 3.7grams of suspected cocaine in his pocket. Sanchez was booked in the San Luis Obispo County Jail for Felony Auto Burglary and Felony Possession of Narcotics.