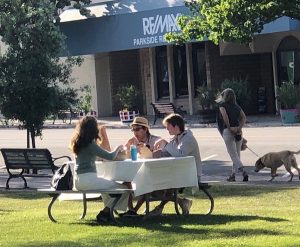 –The Paso Robles City Council held a virtual meeting Tuesday. Fire Chief and current Emergency Services Director Jonathon Stornetta provided an update on COVID-19. Stornetta said Governor Gavin Newsom changed some of his metrics on Monday which makes it easier for San Luis Obispo County to qualify for the Stage 2 variance criteria of the reopening plan. Stornetta said most of the counties in California qualify for reopening under the new guidelines with some modifications, i.e. social distancing at restaurants.

The council discussed a proposed increase in solid waste collection rates, which generated a lot of public testimony. Members of the public called in to speak on the proposed increase. Most public comments were in support of the proposed increase. Vince Vanderlip and Barbara Partridge each mentioned the long-term relationship the city has enjoyed with Paso Robles Waste and Recycling. Joe Ontiveros talked about the expense incurred by Paso Robles Waste in operating three separate trucks and three drivers for each house which the garbage company serves. He described how a separate truck is required to pick-up green waste, trash, and recyclables. Norma Moye said that the Paso Waste employees are hard workers and they serve the community well. Paso Waste’s Mark Perry, who was recently honored as Citizen of the Year, is one example.

Several speakers spoke against the proposed increase. Kathryn Barnett said the timing is not good, because many people are out of work. Dan Blackburn said that the increase is part of a five-year extension. He said the contract should be put out for bid. John Borst said that a 30-percent increase was too great, and not consistent with what other cities are doing. The proposal is actually an 8.8-percent increase the first year, 8.8-percent increase the second, and a 6-percent increase in the third year. The average homeowner would initially see about a $3 increase, depending on the size of their trash receptacle.

The council discussed the proposed Fiscal Year Budget for 2020-2021. City Manager Tom Frutchey said that California cities have reserves that range from 10-percent to over 50-percent of the city’s operating budget. He said Atascadero’s reserve is 50-percent, but they have fewer expenses and both the Atascadero mayor and city manager are Certified Public Accountants. The Paso Robles City Council voted unanimously to recommend the city adopt “Option D” proposed by the budget analysts. That would direct staff to develop a budget that would target a 30-percent budget reserve. That plan will come back before the council.

The city council also discussed a proposal to create a City Park Dining Program. The original plan included closing Park Street between 12th and 13th Streets, and setting up tables in the street. Stacy Jacob of Travel Paso spoke in favor of the concept. Councilmember Steve Gregory felt it was too drastic a proposal to adopt quickly. He said not all the restaurants in downtown Paso Robles were consulted about the proposal. He asked the discussion be delayed four weeks.

Picnic tables will accommodate diners who buy food at neighboring restaurants. The council rejected the proposal to close Park Street between 12th and 13th Streets in downtown Paso Robles. Restaurants may continue to use the parklets for three months. After 90 days, they will be required to lease the land area from the City of Paso Robles.

The Paso Robles City Council Meeting lasted until after midnight. Mayor Steve Martin said, “This has been one of the long meetings held recently.”