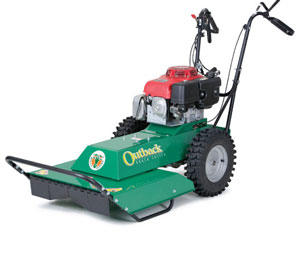 An image of a Billy Goat High Weed Mower. Lorenzen was accused of stealing one from the city.

A former Paso Robles city employee is going to jail after being sentenced on May 29 for stealing city property. Former Building, Parks and Streets Maintenance Supervisor Charles Lorenzen reached a plea agreement with the San Luis Obispo County District Attorney’s office that reduced the original charges of three felony counts of grand theft to a single count of misdemeanor petty theft.

Lorenzen was sentenced to 20 days in county jail, three years probation, a $300 fine, and $680 in restitution. He is currently free on bail and expected to begin his sentence July 28.

The court case shows Lorenzen was accused of stealing a Billy Goat High Weed Mower, a Husqvarna Edger, and a Husqvarna Rotating Tiller.

Although Lorenzen, a Paso Robles city employee since July 2000, was investigated after officers with the Paso Robles Police Department received a report of possible criminal activity.