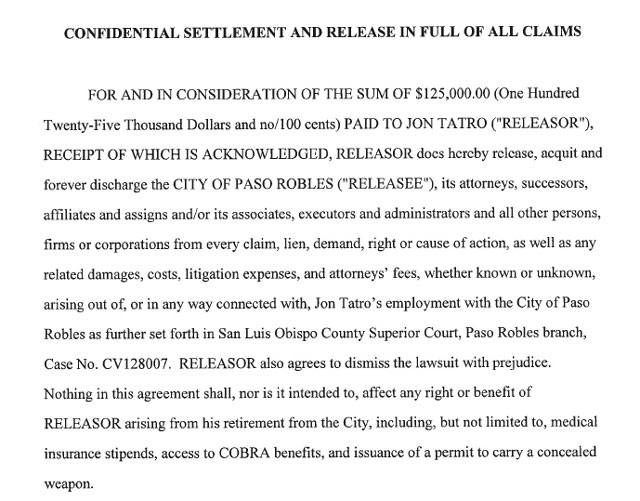 Part of the agreement reached between former police officer Jon Tatro and the city of Paso Robles to settle the officer’s lawsuit.

The city of Paso Robles offered $125,000 to settle a lawsuit by a former police who accused the department of traffic ticket quota system. The agreement was reached between the city and former officer Jon Tatro after opening statements of the trial concluded on March 13. The two parties signed the agreement March 20.

The terms of the agreement were not initially disclosed. The Paso Robles Daily News requested a copy with a public records request today and received a prompt reply.

Tatro filed the lawsuit in February 2012 that accuses the police department of instituting a quota system for issuing tickets. He says he was retaliated against for complaining about the alleged quotas. Traffic ticket quotas are illegal in California.

The suit claims that officers received monthly performance reviews with the number of citations they wrote compared to other officers’ averages. Tatro says he received notice that he failed to meet expectations by falling below the average. Tatro resigned from the police department after a 25-year career on the force.

The city has insurance with the California Joint Powers Insurance Authority, which covers some of the legals expenses. In addition to those, “The city has incurred $33,594.00 in attorneys’ fees and $2,671.82 in costs since July 2012 related to the claim and
subsequent civil litigation filed by former City police officer, Jon Tatro,” according to a statement from city human resources manager Marlaine Sanders.