City Water Tank To Be Drained For Maintenance 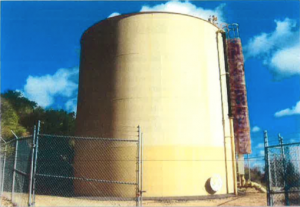 Merry Hill tank will be drained of it.s 150,000 gallons of water starting February 4 and continuing until February 8.

This is in preparation for the City’s contractor to rehabilitate the interior of the tank to address surfaces that have deteriorated. Rehabilitation work includes recoating ladder interior, spot repair of interior coating, installing new foundation and anchors, and welding some areas as needed.

Merry Hill Tank is located on the west side of the City. The tank is a circular welded steel tank with a 30-foot diameter and a shell height of 32 feet. The tank was constructed in 1962. It hold a small fraction of the city’s 12 million gallons of water storage.

Merry Hill Tank report to the city council in December, 2012:
▪ The roof plate has a significant amount of corrosion.
▪ Piping connections have aged and do not have the flexibility for seismic
movement.
▪ The interior and exterior coatings are old and deteriorating in areas that are
structurally critical.
 There are no plans to replace this tank. The proposed work is to extend its
useful life.

The contractor hired by the City is a local firm, Paso Robles Tank, Inc. located on 26th Street. The repair work is expected to be completed in early June and the tank should be back in operation by summer 2013.