Paso Robles News|Saturday, February 4, 2023
You are here: Home » Region » Classic cars rev up for cruise From the Summit to the Sea 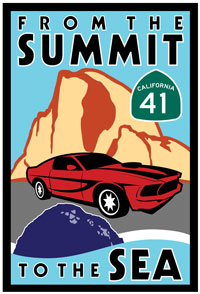 Classic car enthusiasts are warming up their engines for a cruise through California history as a salute to both Yosemite National Park and the City of Morro Bay.

To commemorate these events, car lovers are signing up for the From The Summit to the Sea classic car caravan, scheduled for Oct. 22-24. Participants will gather on Wednesday evening, Oct. 22, for a hosted celebratory barbecue in Oakhurst, the southern gateway to Yosemite.

After spending the night in Oakhurst, vehicles will cruise through Yosemite, where dignitaries will be on hand for the official send-off on Thursday morning. From there, they will travel 140 miles south on historic Highway 41, stopping for lunch at the famous James Dean-themed Jack Ranch Café in Cholame, near the intersection of Highways 41 and 46. After lunch the vehicles will continue on another 80 miles to Morro Bay.

Participants will arrive at the coast in time for a sunset photo shoot at majestic Morro Rock, followed by an evening reception welcoming them to Morro Bay, which is celebrating the 50th anniversary, having become a city in 1964.

Donna Pozzi, chief of interpretation and education for California State Parks, said the public’s desire to participate in the 150th anniversary of the parks system has been contagious.

“The enthusiasm and creativity of statewide partners, such as the City of Morro Bay, have helped make the 150th anniversary of California State Parks and the Yosemite Grant a huge success,” Pozzi said.

For registration information, go to www.FromTheSummitToTheSea.com.