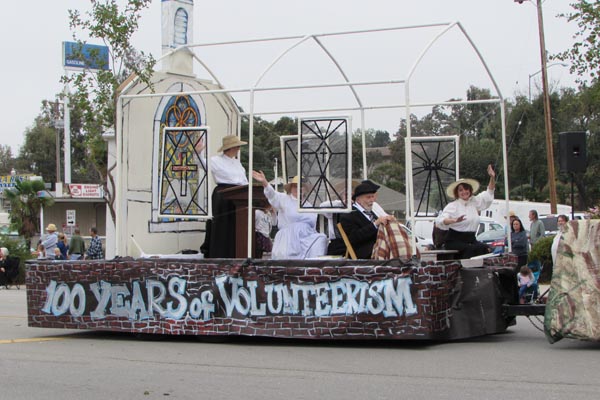 The theme of the Colony Days celebration in Atascadero this year was “‘Volunteers on Parade.” Photos by Jackie Iddings.

–The 42nd Annual Atascadero Colony Days started with a lively parade and local high school and junior high marching bands setting the pace. Parade Marshall, Barbie Butz said, “This year’s theme, ‘Volunteers on Parade,’ is just the right theme. Our community’s volunteers are so well represented and that’s what it’s all about, volunteerism.”

Adding energy to the parade were a twirling and leaping ballet troupe from Atascadero Fine Arts Academy, the Creston Swing Dancers, members of the Monterey Road Elementary School group breaking ranks to high-five spectators, and the Quota International Singing Hands Choir. The local Quota International was chartered in 1974 and its projects include assistance for deaf and hard of hearing. 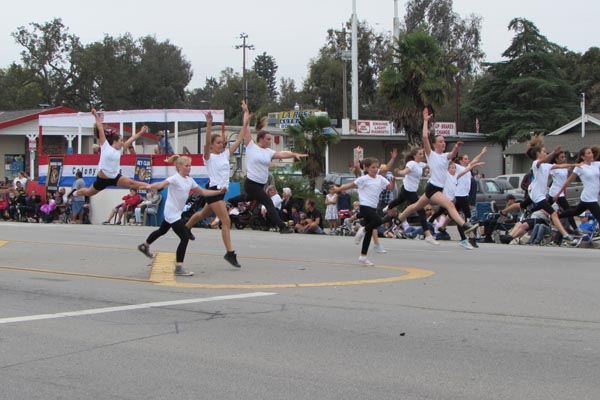 One parade participant, Lexi Suval, a member of the Atascadero High School Show Choir, wrapped up her final Colony Days parade this year. A senior, she’s been a member of the show choir since she was a freshman. “It’s been a lot of fun and I’m going to miss our community performances,” said Suval. Next year she is off to study English Literature at a college near San Diego. The show choir is a course that teaches high school singer/performers advanced skills in vocal techniques, music skills, and choreography. Students also participate in extra-curricular performances. 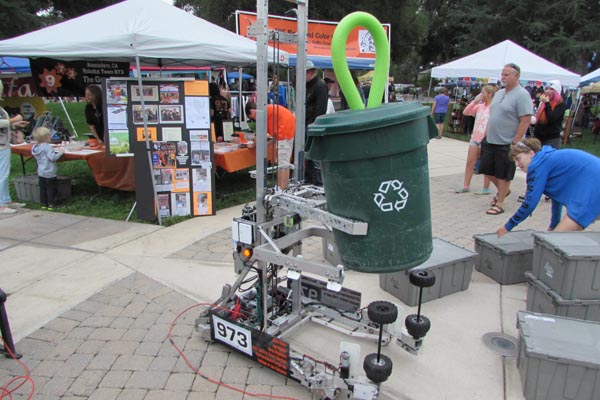 As the parade ended, participants began mingling with the public to enjoy the events and exhibits of the day. One of those parade groups was the Atascadero High School Greybots robotic team putting their robot Sandstorm through its paces. Greybots spokesman, Bryce Nelson, said they built the award winning Sandstorm in about six weeks, sometimes working seven days a week. They won the L.A. Regional competition and placed seventh in the recent National Championships in St. Louis, Missouri. The challenge for 2015 robotic competitions was to build a robot that could stack totes for recycling.

On one end of the Sunken Gardens children lined up for bounce house fun and a few even braved the bungee cord experience. Strapped safely in a harness attached to a mechanical arm, the rider is lifted into the air, then released to bounce up and down from heavy-duty bungee cords. At the other end of the garden, families were arriving to enter their weenie dogs in the Weiner Dog Races and costume contest. The races are open to weiner dogs and weiner dog wannabes. The costume contest is open to all dogs. 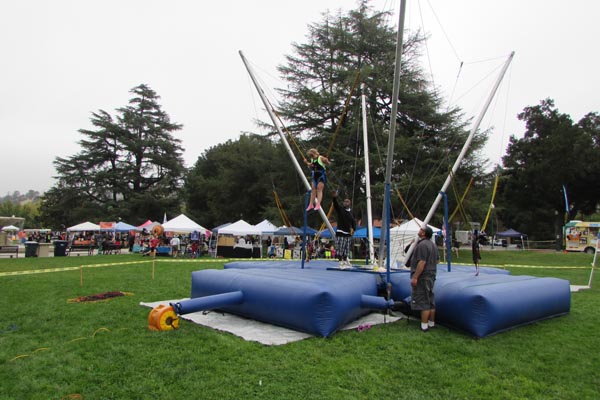 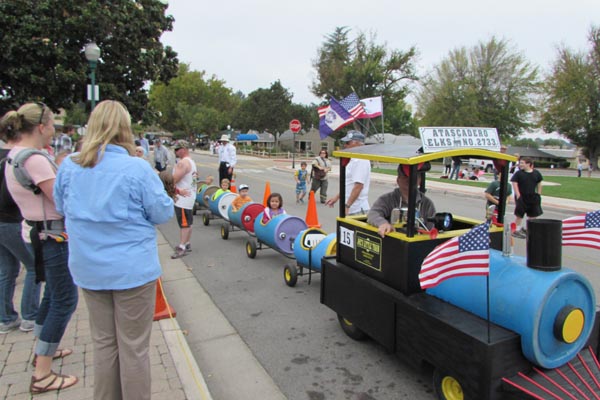 Joe’s Little Train, operated by the Atascadero Elks, took children on a short and winding train ride along Palm Avenue and West Mall.

Ariel, a six-month old terrier mix, was being signed up for both the races and the costume contest. “She can be a leopard,” said her owner, Alyssa Taylor, referring to Ariel’s costume. “We’ve had her four months. We adopted her from a shelter in Fresno.” When asked if Ariel was fast racer, Taylor said, “I think so.” 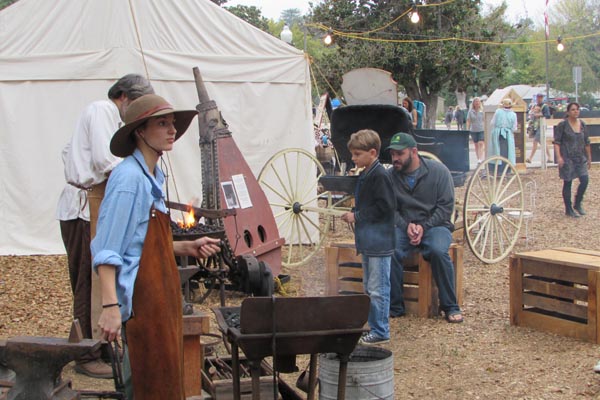 Blacksmiths give demonstrations in Tent City.

No one can spend any time at a Colony Days celebration and miss a visit to Tent City. Atascadero Colony Days’ Tent City is a reenactment of the original 1913 Atascadero tent community. Volunteer actors and exhibitors representing early merchants and residents dress in costumes of the time.

Atascadero residents Abe and Margo Barakat were visiting Tent City to spend time with their grandson, Benjamin Barakat, who was a Tent City paperboy. Several paperboys and papergirls, all dressed for the early 1900s, were busy throughout Tent City and the Sunken Gardens selling copies of “Colony Days Special Edition” for 10 cents. “This is our first year at Colony Days. We are really impressed with how the history of the town is celebrated,” said Abe Barakat. The Barakats retired to Atascadero three years ago and both state they are adding Colony Days to their list of events to attend from now on.