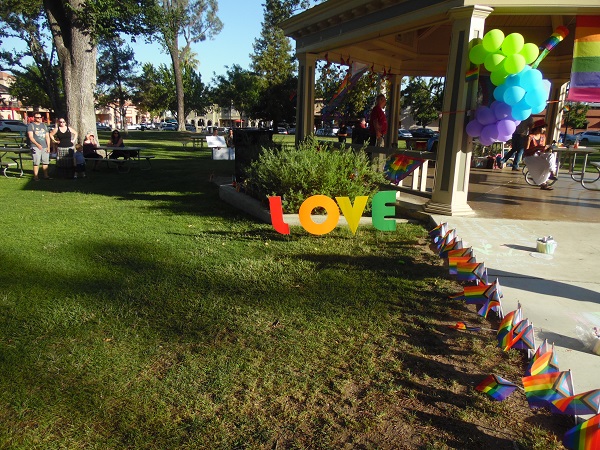 – Downtown City Park was the Friday evening scene for the first Paso Pride event. It was organized by the groups Little Gay Paso and Paso People’s Action. Families and friends turned out to celebrate with music, chalk art, rainbow ice cream floats, and cookies.

Kids were treated to a special reading of “Julian Is a Mermaid.” The story, by Jessica Love, tells the story of a boy who wants to become a mermaid and participate in the Coney Island Mermaid Parade.

Kevin Atkinson, a member of the Paso Pride organizing team, said the group was inspired to host Paso Pride to fill a need to build community. “We want to create more acceptance in this area,” said Atkinson. “We want to create a space where we can all get together and have fun, and where everyone can come for support.” 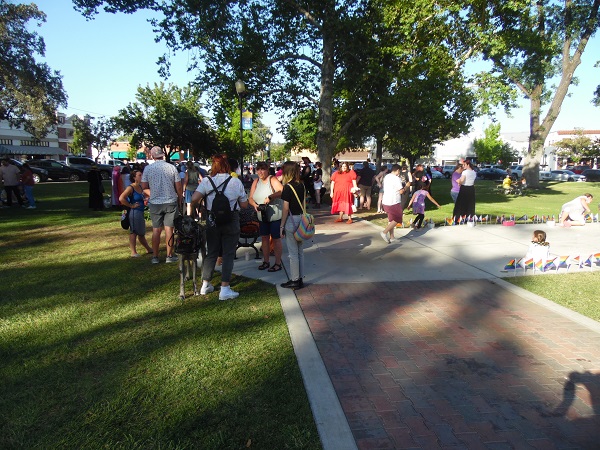 The planning started about a year ago with the final touches taking place in the last six weeks. Atkinson said the idea is to hold more events to create a sense of community. The brunch being held Saturday, June 24 at Brunch is just the beginning of upcoming events and activities. “We are already working on Paso Pride 2023,” said Atkinson.

Kids and kids-at-heart lined up for rainbow ice cream floats. Other guests took chalk in hand to draw on the sidewalk in front of the bandstand and visitors stopped to chat at the information tables for TRANZ Central Coast and Paso People’s Action. 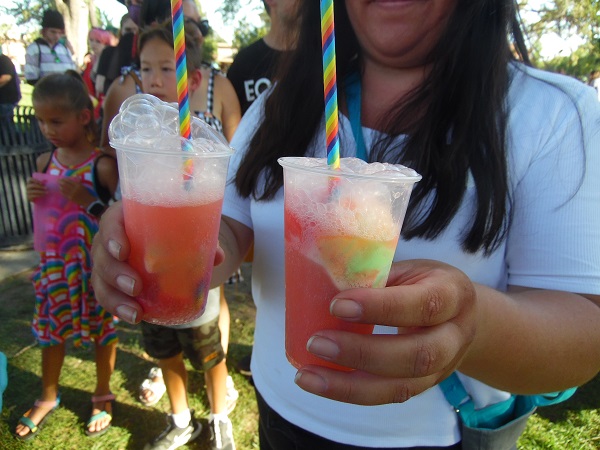 L.J. St. James, who was working the TRANZ table, said it was important to attend Paso Pride so that people don’t feel so isolated and know they have a right to exist.

TRANZ Central Coast (TCC), based in San Luis Obispo, uses outreach and advocacy to help transgender and other gender-diverse people live authentic, productive, and happy lives in a safe and affirming community. The programs include support groups for all ages, including for parents of trans/nonbinary kids.

Paso People’s Action is a grassroots group of Paso Robles locals working to invest in the diversity of the community and to dismantle systemic racism. The group’s most recent project is working to build diversity on the board of the Paso Robles Unified School District. For more information about Paso People’s Action visit their Facebook page, or email pasopeoplesaction@gmail.com. 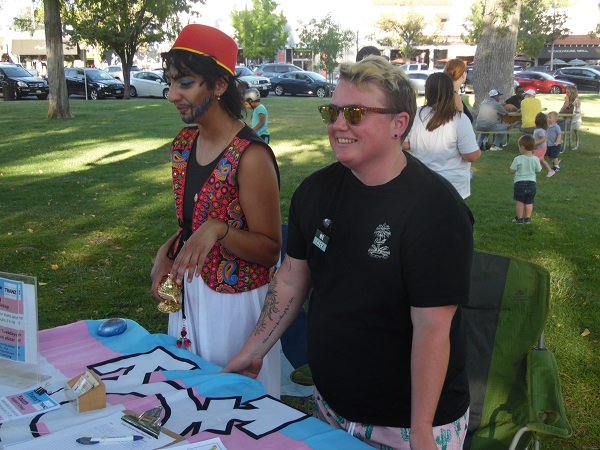 Aladdin and L.J. St. James at the TRANZ table

Paso Pride was not without protestors. Two quiet protestors knelt in the grass, holding signs in front of them. In the days before the event, Atkinson said that the organizers were receiving threatening phone calls, resulting in the team hiring security for the event. The security guards kept a low-key presence as they mingled with the crowd and were also available to escort anyone feeling threatened safely to their cars.