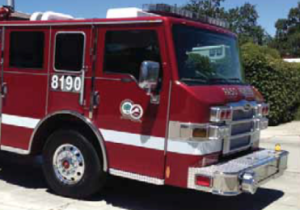 The Paso Robles City Council on Tuesday approved an interim labor union agreement with city firefighters that will expire at the end of the year. The union has been working out of contract for the last 15 months.

The 18-month contract, which is back-dated to July 1, 2012 when the last agreement expired, would give negotiators for the Paso Robles Professional Firefighters, IAFF Local 4148, a brief pause before planning the next one.

The agreement calls for no change in wages or benefits. This is because the City has experienced unprecedented financial challenges since 2008, city staff says in a report. “Organizational spending has been dramatically reduced by reducing staffing approximately 35-percent and suspending contractually guaranteed wage and benefit adjustments,” the report says.

“While there are some reliable indicators that the economy is on the mend, the city remains fiscally conservative until there are stronger signs of recovery,” says the city report. “All labor groups, including the IAFF (Professional Firefighters Union) Local 4148, were asked to “hold the line” on any wage adjustments for an additional contract year.”

New negotiations are expected to begin soon, the report says.