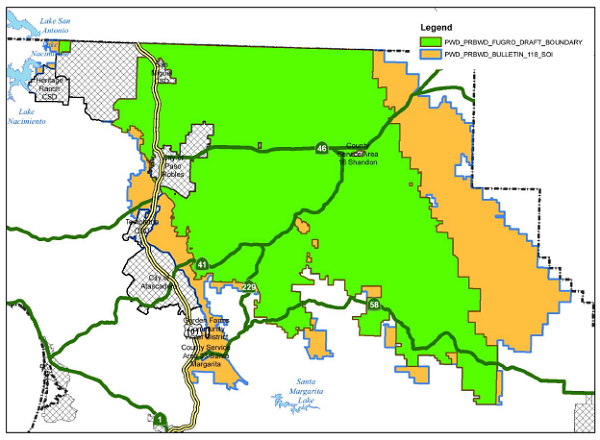 Proposed new boundaries of the Paso Robles Groundwater Basin District. Green areas are the proposed district. Yellow areas represent the original boundaries defined by the the State of California.

County will let the courts decide

–Plans to redraw the boundaries for the proposed Paso Robles Groundwater Basin District were setback in December when the county announced the intention to wait for a determination from a January court hearing. Public Works Utilities Division Staff Engineer Courtney Howard confirmed that changing the boundaries has been postponed until after a court case hearing in January. Howard said those results will give the county better information for establishing the proposed district. The boundaries of the groundwater basin can only be changed by the State of California upon request from the county. The announcement was made by Carolyn Berg from the San Luis Obispo County Public Works Department during a Paso Robles Groundwater Basin Advisory Committee meeting.

In November 2013 a Quiet Title Lawsuit was filed by Plaintiffs Protect our Water Rights (POWR). The County of San Luis Obispo, the cities of Paso Robles and Atascadero and the San Miguel and Templeton Water Districts were named as defendants. The lawsuit claims that the county supervisors exceeded their legal authority by attempting to restrict the primary water rights of overlying users while at the same time exempting water purveyors who have inferior water rights. The courts handed the plaintiffs one victory in August of this year. The case is proceeding with another hearing set for January 2016.

The Paso Robles Groundwater sub-basin is the largest section of the nearly 1,000 square mile aquifer. One proposal from the advisory committee is to reduce the sub-basin boundaries by around 20-percent. The reduced boundary is based on a 2002 study that modifies the basin boundaries established by the California Department of Water Resources (DWR) Bulletin-118. The reduced boundary is derived from a ground water study by the Fugro corporation that was commissioned by the county. Fugro is an international company specializing in geotechnical, surveying, subsea and geoscience services.

In February 2016 ballots are being mailed to landowners and registered voters who live within the proposed boundary, excluding residents receiving water from municipal sources, such as residents in Atascadero, Paso Robles, and Templeton.

The ballots need to be returned to be counted on March 8. County Clerk Tommy Gong stated that approximately 7154 ballots are being mailed, 5,000 to landowners and 2154 to registered voters who are not landowners. Gong stated these numbers are “preliminary because the assessor’s office is still identifying landowners and registered voters within the proposed boundaries.” Gong also stated that the only way for the election to be canceled would be by court order.

There are three issues up for vote:

Preliminary election information, including candidates for the Board of Directors, can be viewed here.