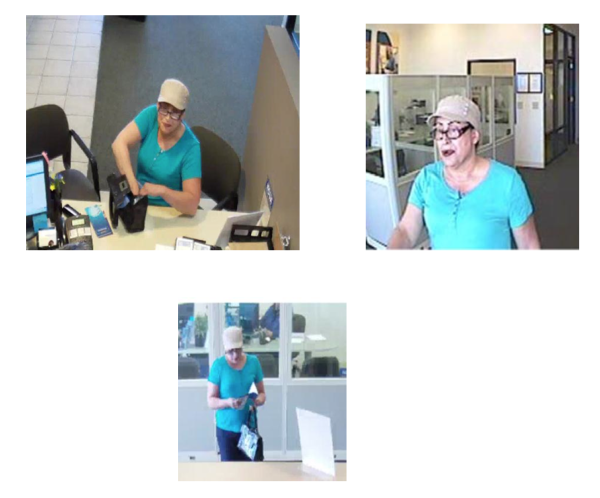 Still images from surveillance video at Golden One Credit Union.

Tuesday, 7-16-13 at 5:04 p.m., the Paso Robles Police Department received a report of a robbery in progress at the Golden One Credit Union in the 100 block of Niblick Road near Walmart. A suspect identified as a hispanic female adult entered the bank, demanded money and then left on foot with an undisclosed amount of money.

Witness reported several police cars at the scene, a TV new crew and yellow police tape surrounding the parking lot nearby at the Woodland Plaza. A weapon was mentioned, but none was seen, police report. Paso Robles police detectives, along with crime scene investigators, are currently processing the scene with the FBI.

The suspect is described as a Hispanic female, 35 to 40-years-old, 5′ 7″, 150 to 160 pounds, wearing dark framed eye glasses, a turquoise blue t-shirt, tan cap, black purse, and blue jeans. There were no injuries during this incident and the loss is still being determined.

Attempts to locate the suspect in the area met with negative results. The California Highway Patrol helicopter assisted with those efforts.

The Paso Robles Police Department is seeking assistance from the public to help solve this crime. If you have any information about this crime or any person(s) involved, you are urged to call Crime Stoppers at (805) 549-STOP (549-7867) or submit a Web Tip from the Crime Stoppers website at http://www.slotips.org.

You can also submit a “TEXT TIP” by texting “slotips” and your message to CRIMES (or 274637). You do not have to give your name. Crime Stoppers will pay a cash reward of up to $1,000 for information leading to arrest and conviction, and you can remain anonymous.