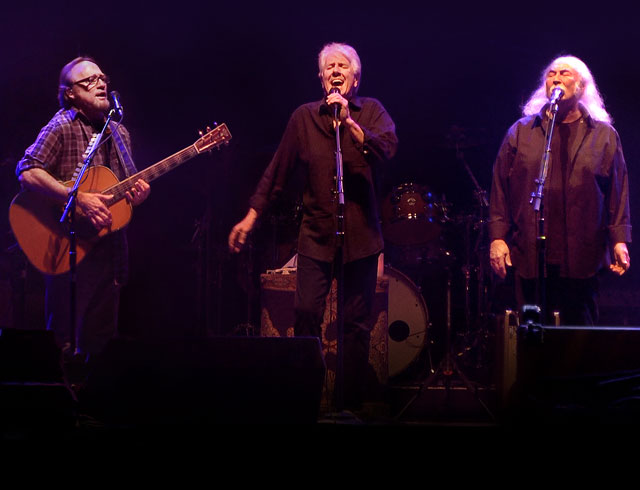 On the heels of their sold out March 2014 tour, Crosby, Stills & Nash announced additional tour dates, including a stop at the Vina Robles Amphitheatre in Paso Robles on September 30. The group will perform songs from their extensive catalogue, as well as new material from each member.

Crosby, Stills & Nash will be accompanied by its backing band featuring: Shane Fontayne on guitar, Steve DiStanislao on drums, Kevin McCormick on bass, James Raymond on keyboards, and Todd Caldwell on organ.

David Crosby, Stephen Stills and Graham Nash unite as “three together” for the Summer 2014 dates amid a full slate of side and solo projects:

This summer, Crosby, Stills & Nash will be donating $1 per ticket sold, to charity. And, excluding VIP and special benefit seat packages thru their official website, all tour tickets sold to the general public are priced under $100. Details and complete tour schedule are available at www.crosbystillsnash.com. Special benefit seats are available through www.guacfund.org.

More than four decades since CSN first harmonized in Laurel Canyon, and played its first-ever concert as a trio at the legendary Woodstock festival, its members continue a creative partnership that is one of the most influential and enduring in music. David Crosby, Stephen Stills, and Graham Nash have each been inducted into the Rock and Roll Hall of Fame two times—with Crosby, Stills & Nash, and a second time with The Byrds, Buffalo Springfield, and The Hollies, respectively. They are also in the Songwriter’s Hall of Fame, honored both for CSN as a group, and as individual solo artists.