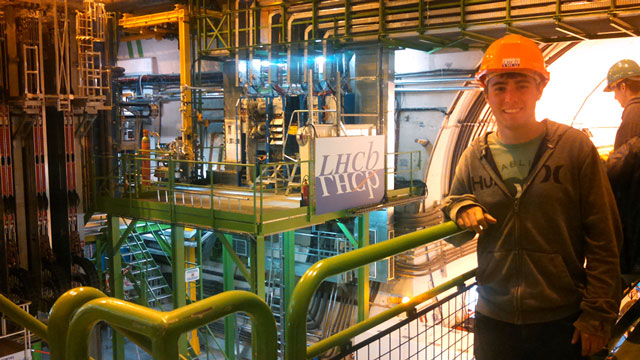 Cuesta College student Chas Frederickson participated in the trip to Switzerland. This photo was taken in the underground facility that houses the Large Hadron Collider.

Two groups of Cuesta College students recently traveled to multiple countries around the world to study physics and climate change. The excursions were a part of two single-unit courses led by Cuesta College physics instructor Dr. James Eickemeyer. The trips spanned the countries of Switzerland, New Zealand and Australia.

Seventeen students participated in a Field Studies in Physics course, which explored the principles of nuclear physics via a tour of the Large Hadron Collider (LHC) located near Switzerland. The collider is the world’s largest and highest-energy particle accelerator. Built by the European Organization for Nuclear Research (CERN), the LHC is considered one of the greatest engineering milestones of mankind. The structure measures 17 miles in circumference and lies in a tunnel nearly 600 feet beneath the Franco-Swiss border near Geneva, Switzerland. The trip took place from May 26 – June 9.

“We were fortunate to get access to the underground facility at CERN,” said Dr. Eickemeyer. “From this unique experience, we gained a better understanding of the difficulties involved in explaining why the universe is composed of matter rather than antimatter.”

Six students took part in a Global Warming Studies course that took place June 23 – July 4. The students traveled to New Zealand and Australia, where they explored the principles of global warming as it relates to environmental changes. The class gathered data on decreases in glacier size, increases in desert size and changes in the health of coral reefs.

“We swam with a marine biologist through the Great Barrier Reef to determine the health of the reef, and the possible associations between the reef health and global climate change,” said Dr. Eickemeyer.

This was the second time Dr. Eickemeyer led a course in Switzerland; the first trip took place last summer. He plans to continue the Global Warming Studies course next summer in Europe.