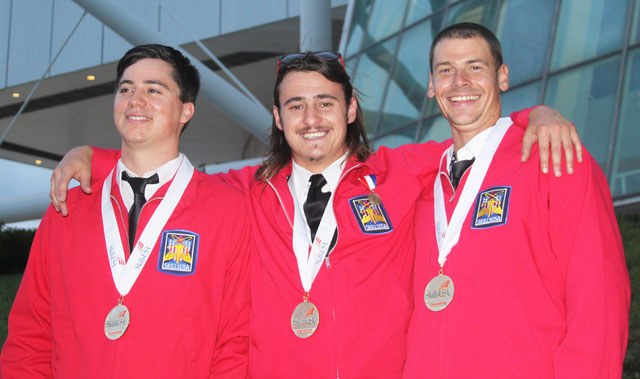 A team of Cuesta College’s Career Technical Education students brought home the gold from the 50th Annual SkillsUSA National Leadership and Skills Conference. Placing first in the welding fabrication competition held in Kansas City, June 23-June 27, was a team of three students – 24-year-old Patrick Hickey of San Luis Obispo, Tyler Grossi, 23, of Lompoc, and 30-year-old Ryan May of Thousand Oaks. The team spent 6.5 hours designing and building a utility trailer from given materials.

“These three students worked flawlessly together,” said Mike Fontes, Cuesta College welding instructor. “Although each had their own job – drafting, assembling, and welding – they came together and worked in unison to build a project to the best of their abilities and it resulted in a gold medal.”

SkillsUSA is a partnership of students, teachers and industry representatives, working together to ensure America has a skilled workforce. In April, 11 of Cuesta College’s CTE students medaled at the SkillsUSA state competition, and in 2013, Cuesta sent five students to the national championship and all five earned medals. This is the second time Hickey and May have medaled at the national competition.

In August of 2015, the WorldSkills International competition will take place in Brazil and involve more than 60 countries. For the second time, Cuesta College will send one of its students to compete; Michael Mullen, who will go for the gold in auto service technology. Earlier this year, Mullen participated in the WorldSkills Americas competition in Bogota, Colombia, where he placed second. Mullen also serves as California’s Post-Secondary President of the organization. In 2011, Cuesta student Daniel Lehmkuhl competed in automobile technology at WorldSkills International in London.