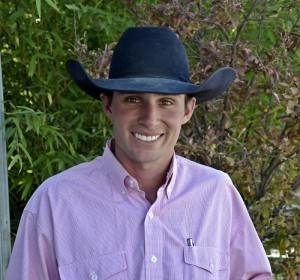 With a 651 composite score, Luke Neubert and This Cats Crackin (WR This Cats Smart x Stressin x Dual Pep) would have made the Derby Open finals if they had entered that division, but Neubert had no regrets. The 2008 stallion he owns in partnership with his friend, Barbara Ditmore, scored a 219.5 in the herd work, a 215 in the rein work and a 216 in the cow work – good for dual championships in the NRCHA Derby Level 1 Limited Open and pen Novice Horse.

The Level 1 Limited Open Championship came with a check for $2,457, a Gist buckle, a Platinum Performance gift certificate and quick wraps from Back On Track.

For the Novice Horse Open, Neubert collected $3,012, another set of Back On Track wraps and certificate from Platinum Performance.

The 27-year-old trainer lives about eight miles from the Paso Robles Event Center.

“I show at whatever’s here in town. I cut on him mostly, but I enjoy the reined cow horse deal. He’s not a reiner by any means. He doesn’t even have sliders on; he just has keg shoes. He’s a good little horse,” Neubert said.

He operates Neubert Colt Company in Paso Robles with his wife of two years, Kelli Neubert. While he and rarely shows, Neubert enjoys himself when he does step into the competitive arena.

“I like showing this horse,” he said of the stallion he bought from his friend, cutting horse trainer Morgan Cromer, adding that he hopes to compete at the NRCHA World’s Greatest Horseman with This Cats Crackin in the future.

He thanked fellow Paso Robles horseman Phillip Ralls for helping him prepare This Cats Crackin for cow horse competition, and thanked Ditmore for her partnership in the stallion.

The Championship paid $1,215 and came with a pile of great prizes: a Cow Trac system donated by Cow Trac, a Gist buckle, a Platinum Performance gift certificate and quick wraps from Back On Track.

Johnson, a pastor and licensed counselor, started team sorting about three years ago. She bought a horse from her trainer, Roger Bias, who suggested trying her hand in the reined cow horse show pen. Johnson then bought Lenas Gun A Smokem last year – and the rest is history.

“I love it. it’s so fun. It’s a great community. Everyone is so encouraging,” she said.

Johnson was pleased with her mare’s performance in all three phases of Derby competition.

“I feel the least competent in the herd work. i ride with roger about once a week and we work cows, but I still feel a little intimidated by the herd work. but we went in there and she was really trying hard for me and helping me out. I walked out very happy with my run. In the reining, she did great stops but was a little chargey in our lead change. Going into the cow work. I knew I had to be a 212 or so to take the lead but I tried to forget about it. We got a really strong cow, and I thought, if I lose it, I’m done, so I decided to just go for it,” she said.

She thanked God, her family, her husband, Tim, who also shows cow horses, and appreciated the support of her trainer, Roger Bias, and his wife, Cynthia.

The Jack and Phoebe Cooke Memorial Derby Amateur Champion was Stuart Bozeman, Idalou, Texas, aboard his steady performer Merada In Style 09 (Cats Merada x Stylish In White x Docs Stylish Oak). Bozeman worked his way to a total 635.5 (205 herd/218 rein/212.5 cow). The Championship paid $1,647 and came with a Gist buckle, a set of Back On Track quick wraps and a Platinum Performance gift certificate.

Bozeman, who has a strong background in cutting, is in his first full season of showing reined cow horses. He has enjoyed tremendous success at other NRCHA premiere at the NRCHA Celebration of Champions Derby in San Angelo, Texas and the NRCHA Stakes in Las Vegas, Nev.

“I count my blessings that I have a really good horse and some really good friends who have helped me, and I keep making good friends. It’s been a blast. Some people say it’s a dream deal I’ve been doing, but I also work pretty hard at it. I don’t just show up at the shows and get on him and hope my horse is trained. We work every day at it, whether it’s my 2 year olds, three year olds or four year olds. Every person I meet has something to offer me, and I hope I have something to offer people someday. Don and Nelle [Murphy] have been a blessing to me, that horse has been a blessing, and my family’s behind me,” Bozeman said.

He also qualified for the Derby Intermediate Non-Pro and Novice Non-Pro finals on Saturday.