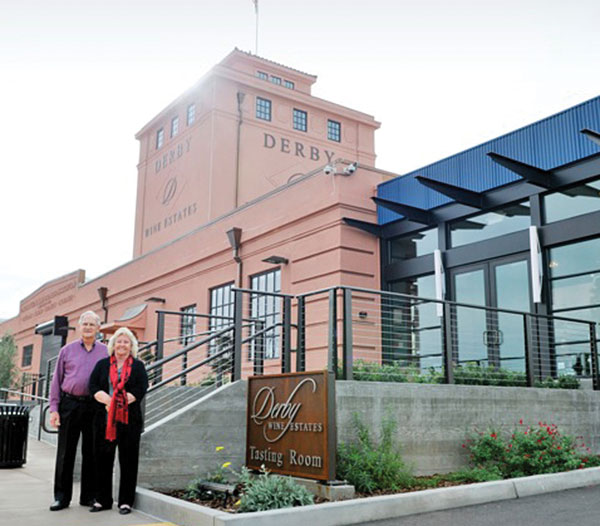 Ray and Pam Derby in front of their restored Derby Wine Estates.

The Paso Robles Chamber of Commerce announced this week its selection for the 2014 Beautification Award of the Year, Derby Wine Estates. The beautification award is being presented this year for the preservation of Paso Robles’ history with the renovation of the historic almond processing building by Pam and Ray Derby.

Ray and Pam Derby, of Derby Wine Estates, moved to the Central Coast in the early 1990’s with the intention of retiring. In 1998 they purchased their first vineyard property, now known as Derbyshire Vineyard. In the years following, Ray acquired the historic Laura’s Vineyard in east Paso Robles and the Westside property, Derby Vineyard. In 2008 Ray and Pam launched Derby Wine Estates and soon were looking for a building to serve as their grape processing location.

The building that is home to Derby Wine Estates was purchased in 2010 with grape processing and a tasting room in mind. The historic building, located at 525 Riverside Avenue in Paso Robles, was originally constructed by the Paso Robles Almond Growers Association as a warehouse and processing plant for almonds. The original building was built in 1922, and was soon referred to as “the symbol of success of the almond industry in Paso Robles”. The almond processing plant was over 11,000 square feet of reinforced concrete.

The productivity of almonds began to decrease in the 1930s and the building went on the market in July 1936. In 1936 K.B. Nelson, a representative of the Farmers Alliance Business Association, a grain brokerage, purchased the building. For 84 years the FABA owned and operated the grain brokerage out of the building, closing their doors in 1975.

The historic building remained empty for ten years, until 1985. In 1985 it became “Riverside Centre” and was home to various businesses such as an appliance repair shop and a drywall storage business. Ray Derby purchased the property in October 2010 with plans to renovate it as a grape processing plant and tasting room.

To protect the integrity and authenticity of the Almond Growers building, Ray and Pam Derby followed stringent rules in making modifications to restore the building. It took three years to complete. Derby Wine Estates is located at 525 Riverside Avenue, Paso Robles, CA 93446. They are usually open days from 11 a.m. to 5 p.m.

Posted in:  Business, Wine
About the author: Publisher Scott Brennan