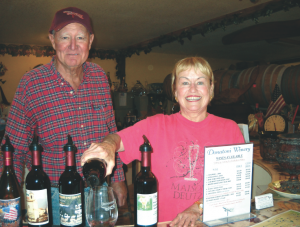 The history behind Donatoni Winery is apparent to any visitor to this Westside Paso Robles winery. Memorabilia and photographs from the owners’ history in the airline industry cover the walls and adorn the tasting bar. And, owners Hank Donatoni and Sandi Baird are happy to elaborate on the story that the tasting room theme tells. Though they are retired now, Hank and Sandi’s connection to the airline business is still strong. Many of their friends were once co-workers, and even members of the aviation community they have never met find their way to Donatoni through their shared histories.

Donatoni Winery’s history has strong ties to the airline industry as well. In 1968 Hank was a pilot working out of Los Angeles International Airport. On a trip to New York he had some time to explore the area and decide to go to Little Italy to buy a book on winemaking. As Hank laughingly says, this was “the beginning of the end” for him. His home in Topanga Canyon was on acreage planted with grapes, and until this time Hank had not known what to do with the grapes when they ripened. With this book on winemaking as his guide, Hank began making wine, a hobby that would eventually become Donatoni Winery.

While continuing to live in and fly out of Los Angeles, Hank became more involved with making wine. He began to travel to Paso Robles to purchase grapes, and established a winery in Los Angeles—appropriately located on property at the end of the runway of Los Angeles International Airport.

Hank and Sandi met on a flight while they were both working, Hank as a pilot and Sandi as a stewardess. One of the photos in the tasting room is of Hank and Sandi goofing around the day they met; someone just happened to snap a photo of the moment. Sandi says, “The whole winery is based on the airline theme because that is what we did our whole adult lives.”

Hank recalls the first vintage of wine that he made with fruit purchased from vineyards in Paso Robles as excellent wine. He says that at the time he thought that its quality was due to his innate talent as a winemaker, but later realized that much of the credit should actually have been given to the grapes themselves. The old-vine Zinfandel that Hank was purchasing helped to form his opinion that the quality of the grape is very important to the quality of the wine it produces. Hank says that he considers himself a “wine watcher instead of a winemaker,” and believes his duty is to shepherd the great fruit he starts with into becoming great wine.

In this initial foray into the world of grape buying in Paso Robles Hank began to establish many relationships that he still maintains today. Hank says that one grower even insists on tasting each vintage of the wines that Hank makes with his grapes, as he enjoys seeing what Hank does with his fruit.

Donatoni also has vineyards on its property, and the four-year-old vines are coming into their own now, and starting to produce more fruit. The Donatoni estate vineyards are made up of Zinfandel, Mourvèdre and Petite Sirah. Donatoni Winery produces numerous wines, including many blends. Hank says that they are known for their Cabernet and their Zinfandel.
Hank and Sandi run every part of the company themselves, and the winery is located steps from their home. Sandi runs the tasting room and business aspect of Donatoni Winery, and even designed their label. Hank makes the wine and does everything from crush the grapes, ferment the grapes and bottle the wine on their property. They have an annual production of around 800 cases, and enjoy the level of involvement that this small size allows them.

A trip to Donatoni Winery will most likely include some interesting stories, a little bit of “airline humor” and some great wine. Donatoni Winery: a destination that travelers of all kinds can enjoy.

Visit Donatoni Winery at their tasting room at 3225 Township Road in Paso Robles. Tasting hours are 12 – 5pm on Saturdays and Sundays, and by appointment, (805) 226-0620. Visit the Donatoni website for more information, www.donatoniwineryandvineyards.com.