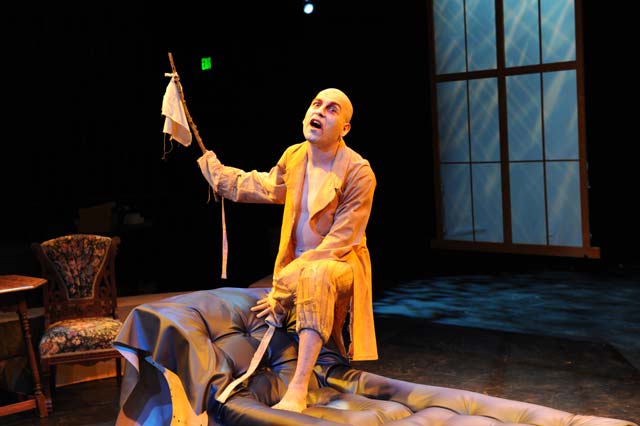 Cuesta College’s Performing Arts Department is gearing up to deliver frights and chills just in time for Halloween with the production of Bram Stoker’s Dracula. The gothic stage version is based on the legendary novel about a mysterious count from Transylvania who terrorizes a seaside town in England. Dracula opened Oct. 23 and plays through Nov. 2 on the main stage of the Cuesta College Cultural and Performing Arts Center.

“Our creative team is pulling out all the stops with this show,” said Dracula director bree valle. “We’ve got buckets of blood, gun fire, explosions, fistfights, magic tricks and creepy fog.”

Cuesta College theater students Bo Branum leads the cast as Dracula and James Burelle plays his nemesis, Dr. Van Helsing. The production involves a total of 50 students. New this fall is a Drama 240 course that teaches skills in lighting, sound, scenery construction, props and scenic arts. The students will be specifically responsible for all the technical aspects of Dracula. “The students build and run the show,” said valle.

Cuesta College’s Theater Department received national acclaim this past year for its original production, ‘pool 63, which follows the racial unrest of the civil rights movements that occurred in Alabama in 1963. In April, the play was recognized with five national awards from the 46th annual Kennedy Center American College Theater Festival.