Drone footage by One With Nature media group

–The Land Conservancy of San Luis Obispo County and brothers Greg and Jeff Smith recently announced the preservation of 3,255 acres of the Eagle Ranch. The announcement ceremony was held Thursday at the Santa Margarita Ranch barn.

The Smith Family has owned the land since 1964, and has operated the land as a working cattle ranch and wildlife refuge. One of the earlier owners, Frederick Peabody, established Eagle Ranch, located south of Atascadero, as a private wildlife refuge in 1919. Greg Smith said the conservation “ensures the property will be preserved into perpetuity.” Land Conservancy Executive Director Kaila Dettman said this gift to the Land Conservancy is “shaping the county so that resources are protected.” 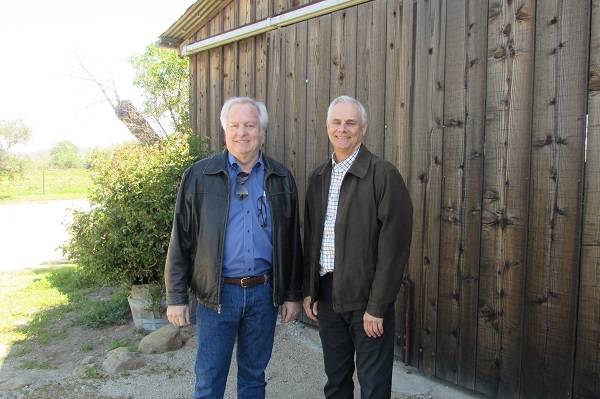 The history of Eagle Ranch includes evidence that the land was in use by original native people long before European contact. The first recorded owner of the property was a Mexican family named Siqueiro who acquired the land in 1770. The Siqueiros grazed cattle on the land for about 10 years then sold it to German immigrant, Albert Frederick Benton. Baron Henry Von Schröder acquired the original ranch site in 1882 and named it Eagle Ranch after pair of eagles Von Schröder found nesting on a cliff near a waterfall that is now part of the conservation easement. The ranch is bordered by US Forest Service land to the south and west.

The waterfall below the cliff holding the eagles nest that gave Eagle Ranch its name.

Peabody acquired the land after it was seized when Von Schroder was called back to Germany at the beginning of Word War I. After Peabody died, the property passed to his wife Kathleen who married Girard Hale in 1930. When she died in 1930, Kathleen Hale left the ranch to Francis Price, Jr. The Smith family purchased the ranch from Price in 1964.

The conservation easement protects grazing land and a wilderness that offers rolling oak covered foothills, oak savannas, sagebrush, chaparral, the waterfall and numerous tributaries to the Salinas River. These streams include Atascadero Creek, Hale Creek, Paloma Creek, and Santa Margarita Creek. It also protects Eagle Lake, a man-made lake developed in 1972 for agricultural use on the ranch. The Eagle Ranch agreement creates the largest gift in the history of the land conservancy. The easement is not part of the north ranch property proposed for annexation into the City of Atascadero. 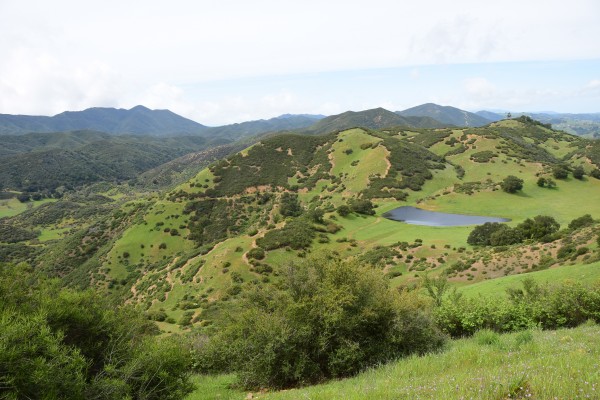 The project was started in 2005 under the legal advice and guidance of Cayucos attorney Roger Lyons. Lyons helped the Hearst family protect the 82,000 acre Hearst Ranch from development. Jeff Smith said when the Smith family decided they wanted to work with the Land Conservancy, Lyons was the family’s attorney of choice. The brothers met Lyons in his home office in Cayucos. “It turned out, Roger interviewed us.” said Smith. “He must have liked what he heard because he agreed to work with us.” Smith credited Lyons with providing the initial knowledge and energy that made the project possible. Lyons died in an airplane crash in 2005 while flying volunteer doctors to Baja California. After Lyon’s death the Smith family worked with attorney Bill Hutton to complete the project.

The Lyons family, represented by Lyon’s widow Susan Lyons and sister Debbie Lyons, were presented with certificates of recognition from Senator William Monning and Assemblyman Katcho Achadjian. The Smith Family and the Land Conservancy were also presented with certificates of appreciation and recognition from Senator Monning, Assemblyman Achadjian and the San Luis Obispo County Board of Supervisors. 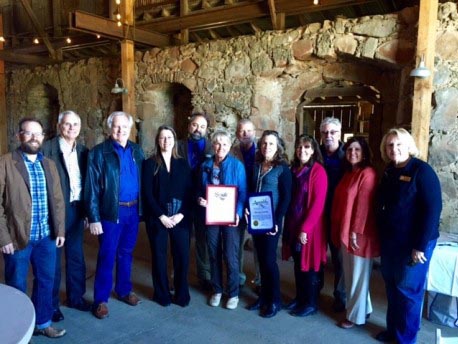 The Land Conservancy of San Luis Obispo County is a local nonprofit land trust working to protect and restore local landscapes for the benefit of people and wildlife. The land trust’s efforts help protect drinking water sources, prevent poorly planned development, restore wildlife habitat and promote family farmlands and ranches in our region. The conservancy has led collaborative efforts to permanently protect over 18,400 acres of land in San Luis Obispo County. They can be contacted by phone at (805) 544-9096 or by email.