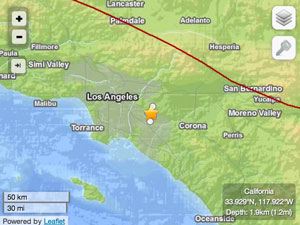 There have been 38 aftershocks as of 10:45 p.m. The aftershock sequence may continue for several days to weeks, but will likely decay in frequency and magnitude as time goes by, according to USGS.

The epicenter of the main tremor was 1 mile east of La Habra, Calif. about 20 miles east of downtown Los Angeles and about four miles deep in the earth’s crust.

An experimental earthquake early warning system provided a four second warning in Pasadena, about 30 miles away from the epicenter, USGS reports.

This sequence could be associated with the Puente Hills thrust (PHT), according to USGS. The PHT is a blind thrust fault that extends from this region to the north and west towards the City of Los Angeles.  It caused the 5.9-magnitude 1987 Oct. 1 Whittier Narrows earthquake. Previously, the 5.4-magnitude 2008 Chino Hills earthquake occurred in this region.  It caused somewhat stronger shaking in Orange County and across the Los Angeles Basin.