Paso Robles News|Monday, January 24, 2022
You are here: Home » Opinion » Eberle isn’t the only one stunned at takeover

Eberle isn’t the only one stunned at takeover 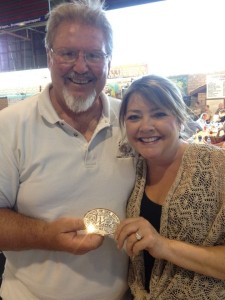 Gary and Marcy Eberle accept the 2013 WInery of the Year award.

I first met Gary Eberle 15 years ago at the Monterey Wine Competition. I was serving judges and one of them was a real standout. He had an outsized personality with equally outsized opinions.

Nearly every one of the 50 judges came over to pay him homage. They were the elite of the wine business, top winemakers, wine writers and industry executives. They loved Gary Eberle.

I learned that day how Gary helped put Paso Robles wines on the map, how he introduced syrah to the United States and helped start the Paso Robles Wine Country Alliance and the Paso Robles American Viticultural Area.

Eberle may mean boar in German, but Gary is a lion of a man. He’s a big guy, with a big ego, but an even bigger heart. He started our Paso Robles Rotary Club’s Winemaker’s Cookoff. Over the last 15 years the event has raised hundreds of thousands of dollars for local scholarships.

He’s not just a nice guy though, he’s also a great winemaker. Under his leadership, Eberle Winery was declared ‘Winery of the Year’ by the International Sommelier competition and by the Central Coast Wine Competition just last year. He was voted #65 of 100 most influential people in the wine industry by IntoWine.com.

He is the “godfather” of Paso Robles wines.

That’s why so many were stunned to hear that his fellow Paso Robles Rotarian, Abe Flory and Abe’s brother Rob along with Gary’s sister-in-law Jeanne Giacobine had pushed Gary out on Monday, removing him from his role running the winery as general partner. Jeanne had received power of attorney over Gary’s half-brother Jim Giacobine. He is being cared for in an Alzheimer’s facility in San Diego.

The Flory brothers own 13 percent of the winery and Giacobine controls 39 percent, giving them 52 percent compared to Gary’s 35.5 percent, according to reports. Sources close to two other partners, grape grower Howie Steinbeck and developer Dick Woodland, told me they were not involved in the takeover.

Gary and his wife Marcy are shocked. “We are so stunned and upset,” Marcy wrote Wednesday. “I can’t feel my legs I am so upset and Gary cannot sleep. It’s very bad.”

Gary says the move was because the other partners want to expand the winery from producing 29,000 cases a year to upwards of 100,000. “They said, and I quote, ‘they don’t want us to be a mom and pop winery’,” Marcy wrote. Gary said the partners offered him a position to stay on as a figurehead.

Dozens of locals have expressed their outrage across social media. “Gary IS Eberle Winery,” wrote winemaker Ed Sauret. “I’ve never seen such a big strong personality so sad and so scared,” wrote radio personality Adam Montiel after meeting with Gary on Monday. “The way this is playing out is complete shit and from what I’m seeing a boat load of people agree,” wrote Matt Brown on his Hoot n Annie wine blog. Many have suggested boycotting the winery or canceling their wine club memberships.

Business is business and these partners surely have their reasons. The new management headed by Willis Blakewell told Wine Spectator “no comment,” the magazine reported. Years ago a local CPA told me that investors were not happy with their returns. I’m sure that’s common in the wine business. Gary says 2013 was the winery’s best year ever and all the partners were making good money.

We don’t know the full story. Nonetheless, this is no way to treat a patriarch of the wine business. A forced and ignoble retirement is not befitting of Gary Eberle.

Posted in:  Opinion
About the author: Publisher Scott Brennan