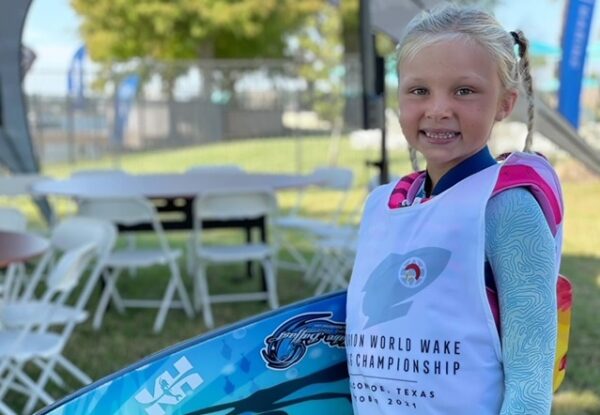 –Eight-year-old Kenzie Hickey returned home to Paso Robles this week after placing sixth in the Junior Division at the 25th Annual World Wake Surfing Championships at Lake Conroe in Texas. Sponsored by the Competitive Wake Surf Association (CWSA) the Junior Division was represented by competitors from countries around the world and included boys and girls ages 13 and under.

Countries represented in this year’s competition included the United States, Taiwan, Ukraine and Russia. Kenzie was one of 12 competitors who were invited to compete in this year’s event.

“We are very proud of her,” said her mother, Tiffany Hickey. “Boating and wake surfing has been a family activity for all of us. Kenzie took to the sport naturally at age 5 and within a month started dropping the rope and riding our boat’s wake on her own.”

The CWSA competition was for both skim surfing and wake surfing. Kenzie was the only Junior wake surfer to make it to the finals. Tiffany said Kenzie was 100% committed to the sport from the start. “She watched videos of professional wake surfers and practiced their techniques. 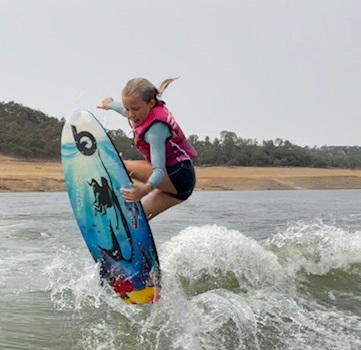 Kenzie is now qualified to move up to the next division, “but we don’t want that kind of pressure on her,” said Tiffany. “She would be competing with people much older than her and we want to keep it fun. She’s already training for the 2022 season!”

When asked about her thoughts on her recent victory, Kenzie said, “I want to go pro.” She also said she had fun at Lake Conroe, “playing with my friends and surfing.”

Wake surfing is a sport in which the surfer trails behind a boat, riding the boat’s wake on a specially designed board, without being pulled. Typically, a surfer uses a tow rope to get into the wake, then drops the rope to ride the steep face of the wake, similar to surfing.

The CWSA is a nonprofit organization that has been making wake surfing more accessible for anyone on a global scale since 2012. The mission is to promote the sport of wake surfing worldwide. The organization holds competitions around the world and has just started the 2022 season.

Posted in:  Community, Sports
About the author: Reporter Jackie Iddings