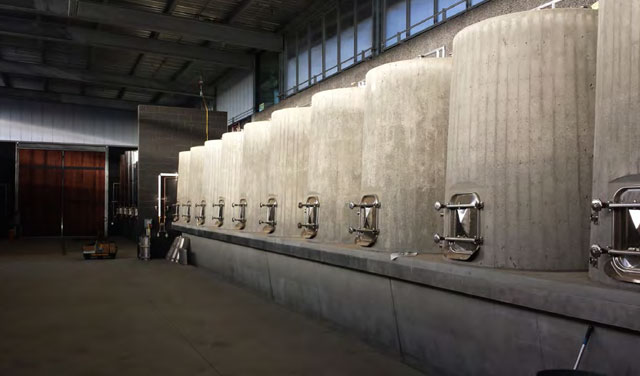 Ten years, seven vintages, and two estate vineyard plantings later, Epoch Estate Wines will take on the 2014 harvest in their new winery atop the historic York Mountain. This much anticipated milestone continues the stewardship of Bill and Liz Armstrong for York Mountain and their Paderewski Vineyard, both located in the west Paso Robles wine country. For the first time in 80 years, fruit from the historic land, first planted by Ignacy Jan Paderewski, will once again make its way to York Mountain for crush.

Located twelve miles from the Pacific Ocean and nestled into the oak-covered hills of York Mountain, the 17,000-square-foot state-of-the-art winery slips seamlessly into its natural landscape. Designed by Lake|Flato Architects of San Antonio, Texas, the winery boasts rustic elegance of times gone by complemented by clean lines of modern architecture. In an effort to preserve the innate, natural beauty of York Mountain, most of the winery is tucked beneath the earth, utilizing a cut-and-cover method. This design allows the winery to blend into the surroundings, and in turn provides the custom barrel room with natural temperature control.

“This is a pretty big moment for us,” says Bill Armstrong. “When setting out on our wine quest in 2004, we did not have our sights set on any particular wine region. We did, however, have our love of Rhône varieties, and being geologists, we understood the importance that terroir plays in the making of world-class wines. Now we are so fortunate, as we have some of the most amazing land in Paso Robles that not only cranks out amazing fruit but also carries so much invaluable California wine history.”

In the 1930s, pianist Ignacy Jan Paderewski harvested his west Paso Robles wine grapes and brought them to York Mountain Winery, where his wine was made. Sitting fallow for nearly 80 years, this land, now appropriately named Paderewski Vineyard, has once again been producing fruit since 2007, under the watchful eye of Epoch Estate Wines. “When we saw these steep and rolling hills in 2004, we knew we had something special in the soils and history of the land,” says Liz Armstrong. “To be the ones to bring this vineyard back to life and to crush this fruit in our new winery atop York Mountain as Paderewski once did is just awesome!” 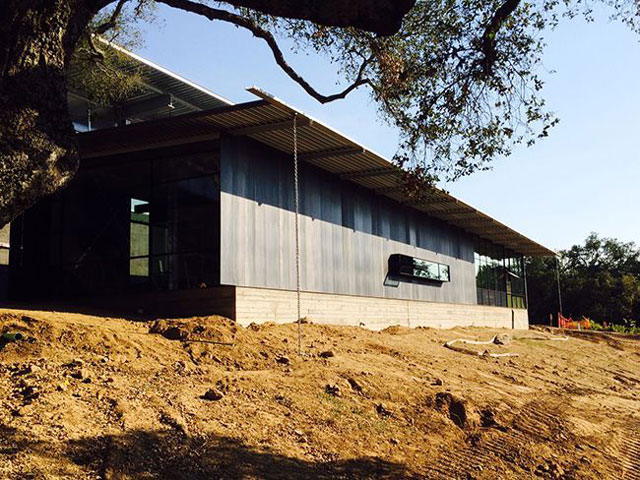 Outfitted with the essentials that make up a winemaker’s dream, Epoch’s new winery is comprised of multiple outbuildings assembled under one steel-framed roof. This facility was designed with both simplicity and flexibility in mind. “Over the years, we’ve taken the time to study our estate vineyards, so that we could deliberately design a winery to fit our winemaking style,” says Jordan Fiorentini, winemaker at Epoch Estate Wines. A gathering of buildings contains Epoch’s crush pad, fermentation room, production offices, and laboratory, which Fiorentini fondly refers to as “the heart of the winery.”

Upon entering the modern-meets-rustic winery, the crush pad boasts a basket and bladder press. Each sits atop a six-foot, cast-in-place, concrete platform, allowing gravity to be the force once fruit is pressed. Walking through the handcrafted, reclaimed redwood doors, the two-part fermentation room is equipped with an assortment of vessels, including sixteen custom designed concrete and stainless steel tanks.

Weighing in at 14,000 pounds each, ten handcrafted, board-formed concrete tanks rest atop a cast-in-place, concrete ledge within the sleek fermentation room. Designed for function with visual appeal, Fiorentini and local tank manufacturer, Micah Utter of Vino Vessel, created the tanks’ conical shape, both inside and out, which allows greater cap compression for fermenting fruit. Each of the handcrafted tanks is fitted with glycol tubes running through the five-inch thick walls, providing Fiorentini with flexibility for fermenting or aging wines.

Six stainless steel tanks were also specifically designed for Epoch Estate Wines. These tanks give the winemaking team the ability to ferment, age, and to use as blending tanks prior to bottling. So not to obstruct the elegance of the sixteen custom tanks, the winery strategically placed the catwalk and railings behind the vessels and installed a safety harness fall protection system to preserve the beauty of these one-of-a-kind tanks.

The barrel room will be naturally cooled by the mass of earth surrounding the unique cast-in-place, board-formed concrete that makes up the ceiling, walls, and floors. Two oculi skylights are strategically placed to allow the natural daylight to filter into the room. This area is not only a place to store aging wine, it also lends Fiorentini a warming/cooling room to jumpstart wines that may need a little help from a temperature change.

The entire winery has been integrated with night cooling to stay in line with the winery’s sustainable strategies. In addition, a photovoltaic system will provide 95% of the facility’s energy. These deliberate and desired elements continue to give the team the flexibility necessary to continue crafting the Rhône-styled blends, zinfandel, and tempranillo wines for which Epoch is known.

The Armstrongs’ wine epoch officially began in 2004 with the purchase of the Paderewski Vineyard and the founding of Epoch Estate Wines. Their admiration for Paso Robles fruit led to their acquisition of their Catapult Vineyard in 2008, followed by the purchase of the historic York Mountain Winery in 2010. The next phase of restoration has begun with a full reconstruction of the 130-year-old York Mountain Winery into Epoch’s new tasting room. Once complete, the new space will showcase and celebrate the meticulously preserved timber, masonry, and original winemaking equipment found within the historic 130-year-old California winery.

“We are beyond thrilled that we are able to be the stewards of both York Mountain and Paderewski Vineyard,” says Bill Armstrong. “Now it is our turn to add our own twist to these historic lands as the past meets the future atop York Mountain.”