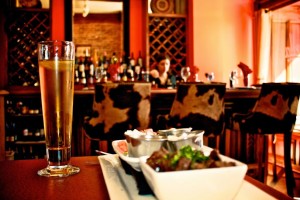 Estrella Restaurant is inviting a different craft brewery from the west coast to match skills with their top chefs at monthly beer dinner parties.

Together, these craftsmen compose an innovative menu of at least four courses of Latin inspired dishes paired with four pilsners of craft beer. Each Brewery sends their brew master or a representative to speak on their specific techniques and flavor profiles, while Estella’s chefs explain their creativity behind each course.

“After serving at the hugely successful Firestone Walker Invitational Beer Festival here in Paso, and noting how well our menu goes with beer, we started looking for fun ideas to promote local craft beer in our restaurant to introduce guests to yet, another terrific product we produce in Paso, craft beer”, says restaurant owner Brenda Clouston.

“Everyone knows we’re ‘super stars’ around here in the wine industry, but beer dinners are for those who enjoy beer, want learn more about brewing, want to taste rare brews, or perhaps just want take a break from their wine for an evening, while enjoying an outstanding Latin meal to go with it. We have several guests that enjoy these dinners so much they come every month”.

Manager Aric Grimes says, “What started as a pretty simple idea to allow our chefs to use their creativity in the kitchen, has exploded into a really energetic night of remarkable food and unusual brews you wouldn’t normally have access to. People end up making new friends and having and great time.”

Read more about the Best Places to Eat in Paso Robles