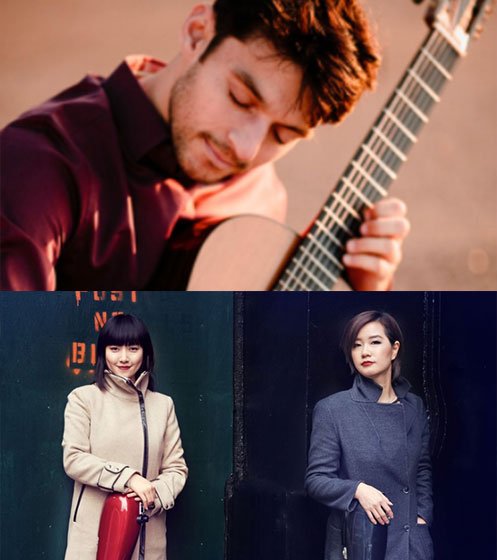 JACK CIMO
Jack Cimo is known for his powerful stage presence, beautiful tone, and exciting renditions. “I have heard many fine guitarists in concert which I have found to be beautiful. This was beyond beautiful. One was totally unaware of Cimo’s stellar technique because his music cut immediately to the soul. I was breathless.” (John Howard, DMA)
BEIJING GUITAR DUO
The Beijing Guitar Duo has performed around the world in halls such as the Concertgebouw, Palau de Musica, Tchaikovsky Hall and the National Theatre in Beijing. This season will take them on a 12-city concert tour in the United States in February as well as other performances in Europe and China. The duo regularly collaborates with orchestras, in ensemble with flutist Marina Piccinini, guitarists Grigoryan Brothers, and with their mentor Manuel Barrueco, touring in North America, Europe, Australia and Asia.
ABOUT THE FESTIVAL
The California International Guitar Festival (CIGF) will be held September 16-18, 2022 at the Performing Arts Center on Cal Poly’s campus in San Luis Obispo, CA.
The CIGF is a sweeping three-day celebration, showcasing the beauty and history of the guitar through six performances by a cadre of international guitar masters. Beyond the concerts, the CIGF will also feature numerous master classes enabling young and up-and-coming performers to learn in front of a live audience. A large luthier marketplace will also take place, bringing a selection of handcrafted guitars and ukuleles from around the world for purchase.
TICKETS: $15 – $40
Festival Sponsors:
The City of San Luis Obispo, KVEC 920 AM, The 2Mic
Show sponsors:
Jed & Diane Beebe, India dD’Avignon & Ignati Vakalis, Robert & Sandra Dickerson