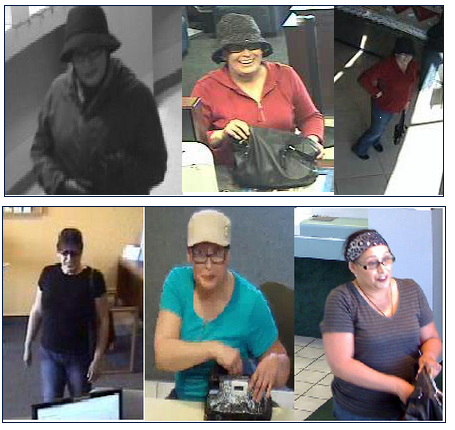 Photos of the suspected bank robber

Brings total to five robberies and one casing in multiple jurisdictions 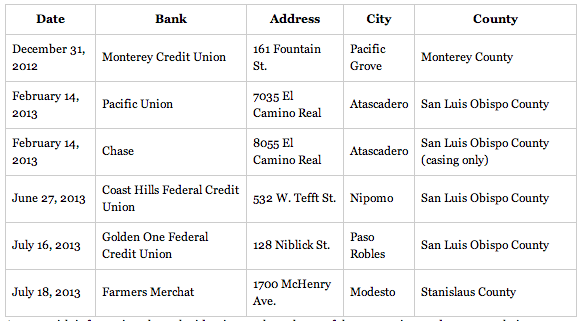 The Central Coast Bandit has been linked to the following bank robberies.

An unidentified female bank robber has been linked to at least five bank robberies and one bank casing along California’s central coast and cities north, including one a week ago in Modesto, California.

The FBI and law enforcement in San Luis Obispo, Monterey, and Stanislaus Counties conducting a joint investigation are seeking information leading to the suspect’s identity. The suspect is known as the Central Coast Bandit, based on the general area in which she began robbing in December 2012.

During yesterday’s robbery at a Farmers Merchants Bank in the city of Modesto, the suspect entered the bank and, according to the victim teller, requested coin wrappers before presenting a note demanding cash. The suspect was wearing a horizontally-striped gray T-shirt with blue jeans and a gray and black headscarf, and she was carrying a black bag.

The Central Coast Bandit is further described as an Hispanic or white female with dark hair, between 5’5”-5’6” tall, 150-160 lbs., and between 35-45 years old. The suspect has been seen carrying a pistol during some of the robberies, and, according to witness accounts, has been seen leaving bank robberies in what has been described as either a gray sedan or gold-colored SUV.

Anyone with information about the identity or whereabouts of the suspect is urged to contact their nearest FBI office or dial 911.

Additional information about bank robbers currently wanted by the FBI’s Los Angeles Division can be found at www.labankrobbers.org.