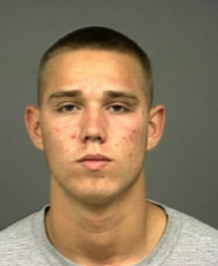 A search warrant prepared by Officer McGuire was served at Rouf’s residence on Shale Rock Road in rural Paso Robles. The search warrant led to Rouf’s arrest and the recovery of stolen property from the Running Stag Way burglary. Additionally, officers were able to link Rouf’s to two other May 28, 2013, residential burglaries on Sycamore Canyon Road and Cedarwood Drive, Paso Robles.

Officers recovered several thousand dollars’ worth of electronic items, jewelry and a .357 caliber revolver as a result of the investigation. The victims of the burglaries have all been notified of the property recovered. The PRPD has not been able to link Rouf’s to any other burglaries as of this time.

Roufs was booked into the San Luis Obispo County Jail on felony charges related to the three burglaries.