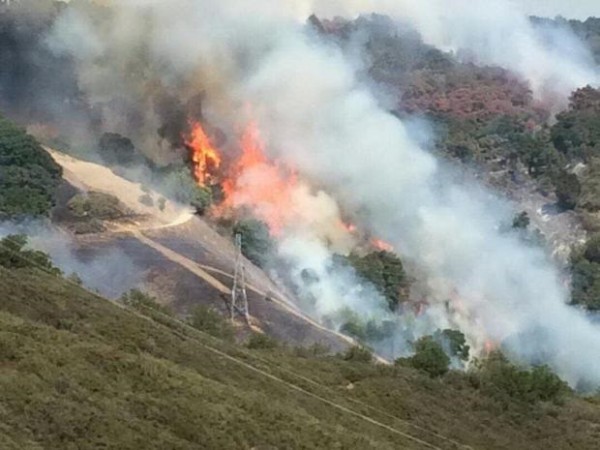 The Cuesta Fire, now burning about 2,000 acres, is causing evacuations across Santa Margarita. Photo courtesy of the U.S. Forest Service.

– About 15 Cuesta Fire evacuees from Santa Margarita filled the Red Cross evacuation shelter in Atascadero when it opened its doors Monday evening as a result of evacuation orders due to the Cuesta Grade fire that started on Sunday. Tuesday afternoon, six evacuees remained with more expected to arrive throughout the day.

The shelter filled the gym of the Santa Rosa Academic Academy elementary school, offering enough space to temporarily house up to 20 people at a time. Of the six evacuees remaining Tuesday, only two were awake at 1 p.m., but both were exhausted from their ordeal. The women declined to speak on the record, one apologizing, explaining that she hadn’t slept and was feeling cranky — her elderly dachshund followed her to a nearby cot. The second woman talked a little of her Santa Margarita house with broken plumbing that could not be repaired until the fire was under control. Tears filled her eyes as she described the anguish of her uncertainty over the condition of her home. She declined to give her name, apologizing that she also hadn’t slept and needed to rest. 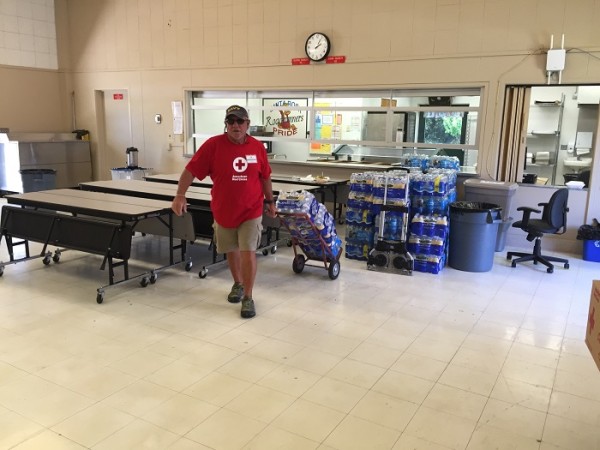 Six volunteers were on site at the shelter, including a nurse and others. Volunteer Patrick Sayne was helping organize; bringing in water, food and setting up cots.

“We’re not the only ones helping here,” Sayne said. “The Red Cross in San Luis Obispo is arranging for food, and we’re getting donations from others. Sometimes, local restaurants volunteer a meal to clients too. What we try to do is to be located outside the evacuation area but close enough for clients not to have to travel very far.”

The Cuesta Fire was reported at 6:14 p.m. Sunday by a motorist driving on Hwy. 101 across the Cuesta Grade, according to the United States Forest Service emergency web-management system. Due to heavy winds and dry conditions, the fire had spread across several acres by the time Cal Fire firefighters arrived on the scene. By this afternoon, the fire is estimated at 2,000 acres and has burned into the Los Padres National Forest.

“Crews are continuing fire line construction in very steep and rugged terrain with drought stricken vegetation,” according to the forest service. “The communities surrounding the Cuesta Fire can expect to see smoke throughout the day and into the evening.”

There are an estimated 1000 personnel assigned to the fire, including 20 hand crews, 73 engines, 9 bulldozers, four water tenders, and four helicopters. Additional firefighters and overhead (support) resources have been ordered, and will be arriving over the coming days. Due to the number of large wildfires throughout California and the Western United States, there is some difficulty in finding available resources.

For more information about making a donation, call 1-800-Red-Cross or go to www.redcross.org.