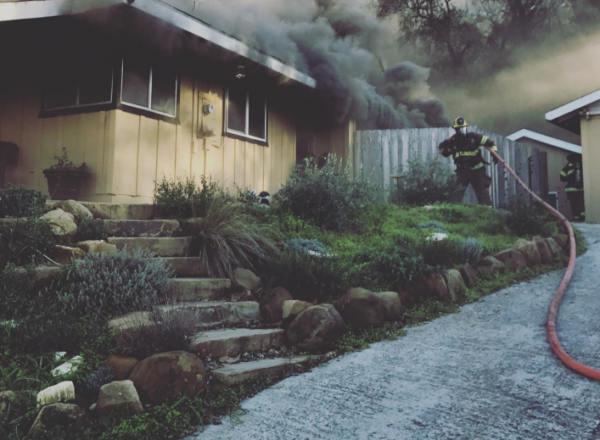 Firefighter pulling the initial fire attack line to the residence.

No injuries were reported

–On Tuesday afternoon at approximately 3:47 p.m., Atascadero Fire crews responded to a single story, single family residence located at 4480 Cayucos Avenue with heavy dark smoke coming from the eves and vents of the attic. While crews were making an interior attack on the fire, the fire burned through the roof. Firefighters confirmed all occupants had safely exited the structure.

Firefighters had to pull a significant amount of interior ceiling sheet rock to access and suppress the attic fire. Although the fire was contained to the attic, the interior living space of the residence sustained heavy smoke and water damage. 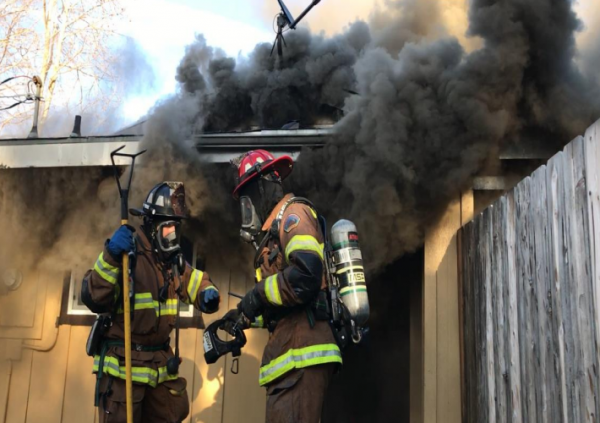 Firefighters preparing to enter the residence utilizing a thermal imaging camera to aid in locating the main body of the fire.

It took crews approximately 25 minutes to contain the fire. Crews remained at scene for approximately 3 hour s for overhaul and investigation.

No injuries were reported.

The home, owned by Doug and Shelly Davis, sustained an estimated $100,000 worth of damage. The cause of the fire was determined to be electrical wiring in the attic.